William Meiners MFA '96 Publishes First Book, 'Though the Odds Be Great or Small' 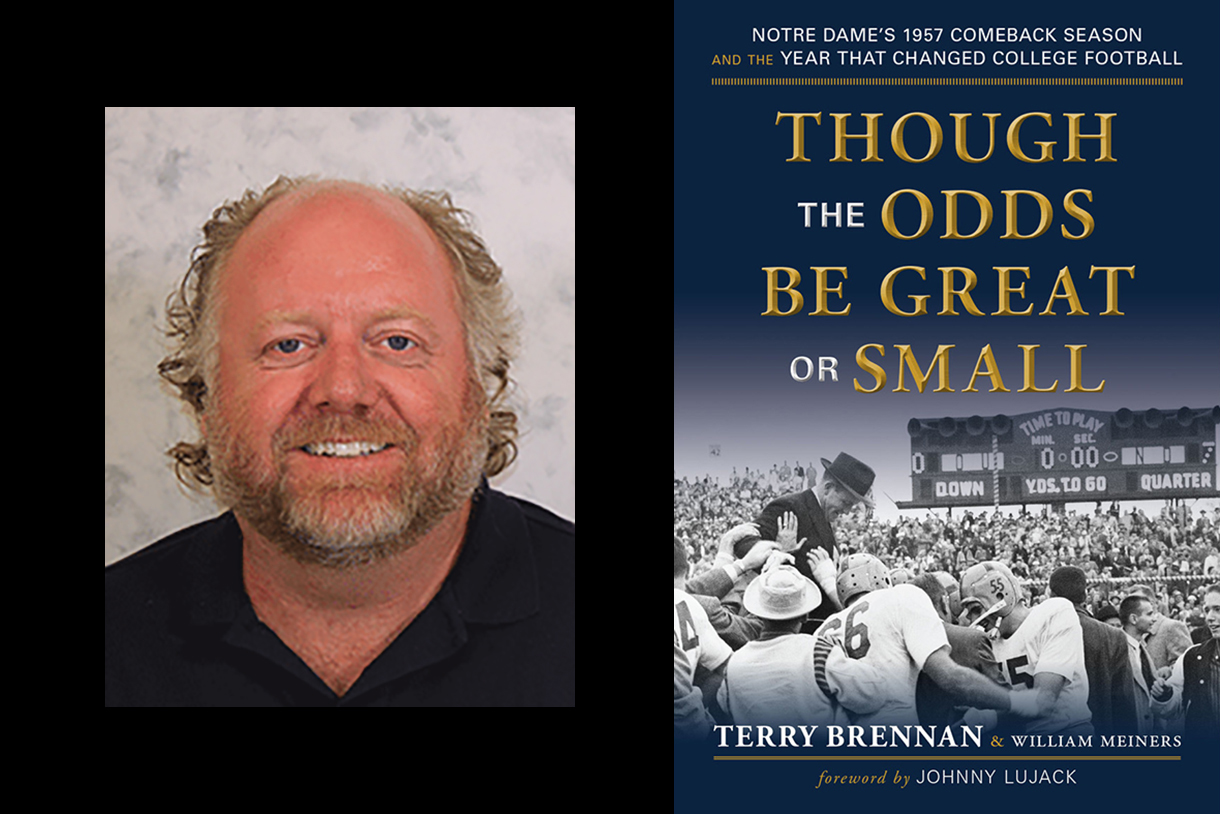 'Though the Odds Be Great or Small' is about Notre Dame's 1957 Comeback Season and the Year That Changed College Football.

William Meiners MFA ’96 has been a professional writer and editor for 25 years. Meiners has written many features and profiles for a variety of publications. He founded Sport Literate, a literary journal that is celebrating it’s 26th anniversary. Now, in 2021, Meiners has authored his first book, Though the Odds Be Great or Small, released by Loyola Press. Though the Odds Be Great or Small is about Notre Dame's 1957 Comeback Season and the Year That Changed College Football. Meiners worked with Terry Brennan, the Notre Dame coach at the time, to tell a story they felt would resonate and educate sports fans.

Here, Meiners discusses his first book and his advice for aspiring writers:

When did you know you wanted to become a writer?
I’ve wanted to be a writer since I took a creative writing class as a senior in high school in 1984. I could be kind of a quiet kid, and I discovered a voice on paper that could be louder. It’s also nice to get lost in the writing process. I’ve been a professional writer and editor for more than 25 years. Though it can be a tough road to hoe, so sometimes I wish I had learned bartending or computers. This is my first book.

Can you share the title of the book and a brief synopsis?
Though the Odds Be Great or Small: Notre Dame’s 1957 Comeback Season and the Year That Changed College Football by Terry Brennan and William Meiners

Terry Brennan, now 93 years, was once rather famous for his youth. He played on some of Notre Dame’s greatest football teams in the 1940s, helping them win national championships in 1946 and 1947. In 1954, at just 25 years old, he was named the head coach of the Fighting Irish, replacing Frank Leahy, his own legendary coach. The bulk of this book focuses on the 1957 season, in which Brennan’s “comeback comets” rebounded from a disastrous 1956 season (going 2-8) to finish 7-3 and cracked the Top 10.

On the quintessential coaching hotseat, Brennan, then a 28-year-old family man, led the Irish back through the toughest of schedules that included five opponents who finished in the Top 20. Four of those teams ended up three through sixth. The team’s biggest win came on the road in November against Oklahoma, where they beat the No. 2 Sooners 7-0, ending their 47-game winning streak.

Beyond the 10-game season of 1957, the book focuses on Brennan’s place in Notre Dame history. As a young, underrated player on those national championship teams, Brennan played alongside grizzled World War II veterans who made the Irish one of the deepest teams in the nation. After his graduation in 1949, he enrolled in law school at DePaul University and coached city championship football teams  Mount Carmel High School. He had fully planned to practice law when Father Theodore Hesburgh, Notre Dame’s president, paid him a visit in Chicago in 1953. After accepting the offer to coach the freshman team at Notre Dame, Brennan’s life was changed forever.

When was the book published? How did you get it published?
The book comes out from Loyola University Press this month (August 2021).

What inspired you to write this book, is this topic personal for you?
In 2019, I was presented with an opportunity to write the book. I began the research in early 2020, met with Terry Brennan and his son Terry Jr. just before the pandemic, and spent much of the spring and summer writing the book. Coincidentally, I grew up a big Notre Dame fan, making it part of my identity. So, the subject is very personal to me. Though I didn’t know much at all about Brennan before beginning the research.

Brennan had written about his experiences in various stages of his life. The book is primarily third person, but we bring in Brennan’s writing throughout the book. He was pretty wildly famous before the age of 30 (Notre Dame had been perhaps the most-coveted coaching spot in all of football), but I don’t think many folks are around that would remember his story. It feels important to share it.

How did your experience at Columbia help you write and finish your book? Are there any Columbia faculty that helped you throughout the writing process? If so, how?
I was at Columbia a long time ago… from 1993 to 1996. You can only write a book by dedicating your time to writing. Even in a book about football, which could get bogged down in statistics, records, and such, I’ve always wanted to tell good stories. Columbia’s writing program, which encouraged writers to tell vivid stories, was certainly helpful.

Additionally, the whole opportunity winds its way back to Columbia College. I started a small press magazine called Sport Literate in Ed Eusebio’s “Small Press Publishing” class (in 1994, I think). SL first came out in 1995 and we published our “25th Anniversary Issue” in 2020. It was through a “friend of a friend” who we published in SL that an editor from Loyola Press contacted me.

How did your time at Columbia College help you become a better writer?
Simply by writing and rewriting. And getting thoughtful feedback from Columbia instructors and professors. Ed Eusebio, Mark Wukas, Mark Davidov, and Eric May were just a few of those people.

What was your major and when did you graduate? How did you decide on this major?
I earned an MFA in fiction writing in 1996. I’ve written more creative nonfiction then fiction. In fact, Sport Literate focuses on essays and poetry. I had earned a degree in journalism in 1992 and felt like I needed to borrow the money and the time to learn how to write. Fortunately, I’ve found jobs where I can keep learning.

What advice do you have for current students?
If possible, students should make college a time for discovery. It’s okay to make mistakes, but maybe you zero in on that thing you want to do. And you try and turn those learning experiences into a passionate pursuit of a career.

Is there anything else you’d like for us to include?
We’ve been lucky to publish some good writers over the years in Sport Literate, including many recognized in “Best of…” anthologies like Best American Essays and Best American Sports Writing. We publish one to two print issues a year and folks can find us online at www.sportliterate.org.