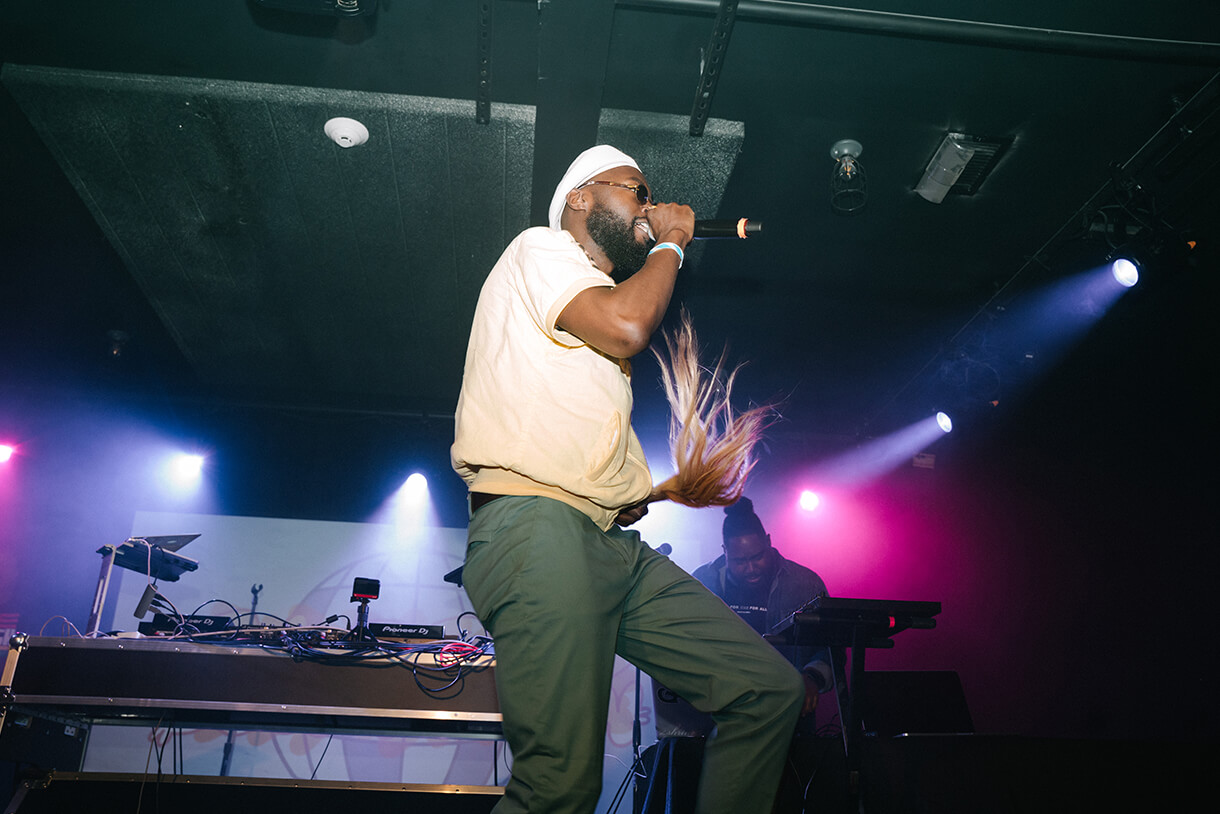 For alum Calid Bowen ’10, life as an artist started as an undergraduate at Ohio State University. “I got my start in music by making beats in the dorm room for other college kids and up-and- coming artists,” he says. His work as a producer, songwriter, and rapper was fulfilling—but it didn’t pay the bills. “When it came to music [in Columbus] there wasn’t really much of a scene,” he says.

Soon, Bowen started thinking of other ways to jump-start his career and build transferrable skills that could help him be strategic about his goals. After a friend mentioned that she was going to Columbia College Chicago for graduate school, Bowen decided to apply too. He liked Columbia; the idea that he would be taught by working professionals and build connections with like-minded artists appealed to him. But he was still concerned about learning enough to tackle the business end of building a creative life. Would this degree—a Master of Arts Management in the Music Business—ever lead to anything resembling financial success?

The question of whether or not that success was even possible was answered at least in part during orientation by (former) Music Department faculty member James “Kimo” Williams. “He kind of got us with a little bit of bait,” Bowen remembers, laughing. “He pulled out two checks for $10,000 a piece--they were his publishing royalty checks. And I got kind of googly-eyed like, ‘Oh man, somebody's actually making money on music! And he's not famous or anything, but he still got money.’” It was a revelatory moment. He saw, firsthand, that it was possible to aspire to a life of creative fulfillment and pay the bills.

That day, during orientation, Bowen had no way of knowing that his experience at Columbia College Chicago would do much more than provide connections and technical expertise in his chosen field. He was, however, determined to wade deep into every area of opportunity he could find. “The resources at Columbia are pretty second-to-none, especially in the Midwest,” Bowen says. The opportunity, for example, to start the hip-hop division of AEMMP Records, the country’s oldest student-run record label, was foundational to Bowen’s experience. Bowen also sat on the Graduate Student Advisory Board, helping students to connect to institutional leadership in and outside of the classroom.

Upon graduation, Bowen realized that not only did he have the opportunity to continue to make music as Calid B (aka Plaintain Papi), he also had skills in-demand by some of the city’s most respected creative agencies. He carved out a niche in social media and strategy by honing his newly minted skills with agencies including Translation, DDB, and Epsilon. Today, he works as a Strategy Director & Web3 Lead at OLIVER Agency. These roles gave him the opportunity to work in thought leadership, build creative networks, and learn from some of the most long-standing successful brands around.

At the same time, Bowen remained dedicated to the music and dedicated to giving back to the institution that gave him so much. Beginning in 2018, Bowen returned to Columbia and taught Marketing 200, Internet and Mobile Business 200. It was an experience that was joyfully fulfilling, and one he only set (temporarily) aside to manage the needs of his newest agency. “I’m not teaching right now, and it’s killing me, too,” Bowen says. “I’m hoping to get back into it.”

Today, Bowen is also hard at work on an innovative new venture, Plantapes Vol. 1, a hybrid music NFT project that will be released on the Polygon blockchain. This venture, which connects Bowen’s love of music with his love of food, is in partnership with a business called Kelewele, based in Brooklyn, known for their plantain-based offerings. For a musician known as Plaintain Papi this is, as he says, “the perfect partnership.” Though the full offering remains in development, Calid notes that “If you buy the NFT album from me, then you'll get access to token-gated private recipes and delectables from Kelewele.” Together, the musician/producer and culinary artist hope to provide transporting experiences that challenge their audience to grow and think in new ways. “With all of my ventures I’m leaning into what I really, really want to do,” Bowen says. “It’s definitely happening, and I’m excited about it.”