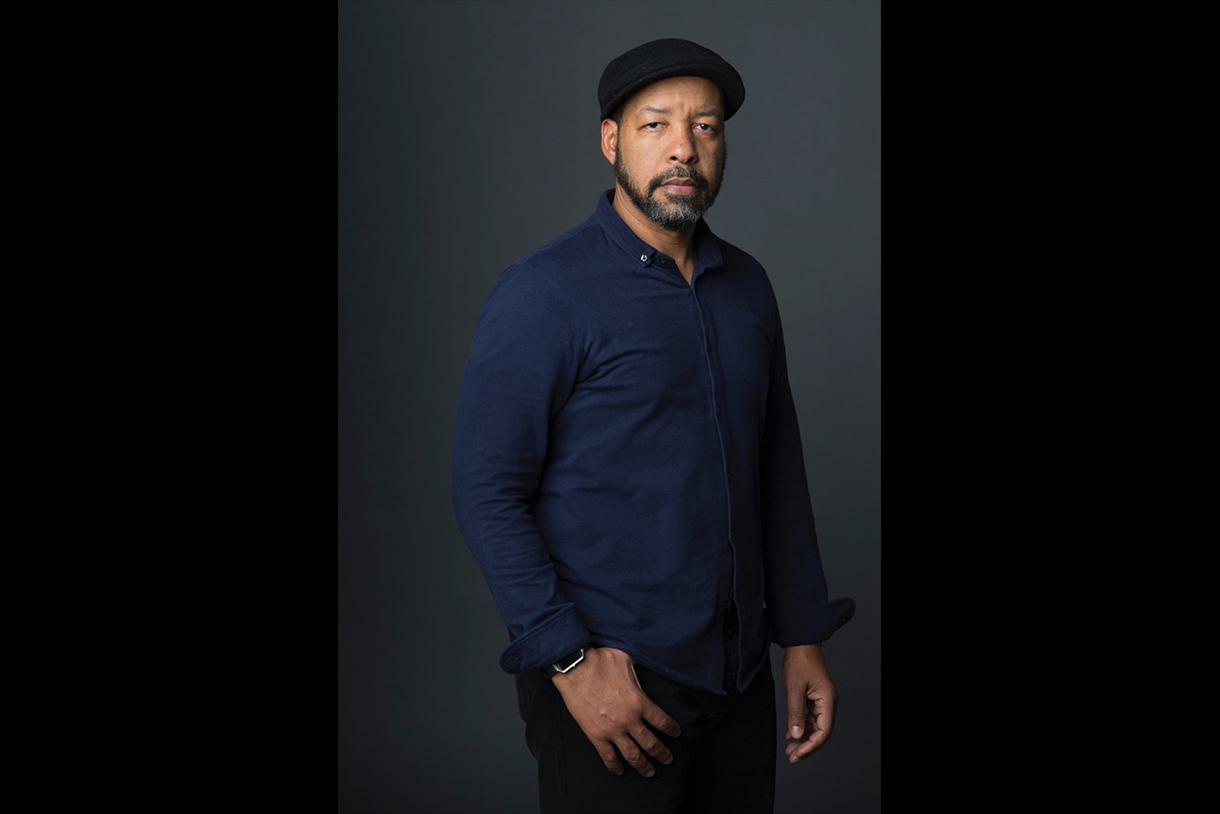 Cecil McDonald MFA ’08
Central to his work is the idea that people and their histories can inform and free each other. Here’s how.

For Cecil McDonald, the narrative surrounding success as a Black man never included discussions about artistic work or creative endeavors. Despite his loving family, supportive community, and rich educational background, the recognition of careers outside of the mainstream corporate culture just was not there. As McDonald says about his life growing up, “We [were] two generations from the Great Migration, so [the idea was that] you should be doing things that look like, as one of my friends calls it, ‘a good sit-down job.’”

For McDonald, though, who had always nurtured rich interests in performance, dance, film, and photography, that mainstream world held no magic. He was interested in places where he could be his most authentic self, and in people who fostered the growth of that self. Those values led him to study photography as an undergraduate and graduate student at Columbia Columbia College Chicago.

Of course, after graduation, it was not a straight line to international recognition with projects like “Looking for Baldwin,” which draws inspiration from Baldwin’s essay, “Stranger in the Village,” or the publication of his award-nominated book, In the Company of Black. First came commercial work, the type that paid the bills and supported his young family, but which failed to feed the soul. McDonald recalls an early job in which he was asked to take pictures of Mayor Daley’s re-election campaign in a year that was sure to be an easy win. “But then I realized,” McDonald says, “it doesn’t really matter if it’s me here taking this picture.”

The realization was a stark one, which drove him away from the world of promotional photography and into environments that were tailored to McDonald’s interests. He began looking for residencies and professional environments that allowed him, as McDonald says, to “be myself, my most authentic self, working with my most important ideas that were unique and special to me.”

Community had long been at the heart of what was important to McDonald. In fact, McDonald recalls a conversation with mentor and now fellow Columbia College Chicago photography instructor Professor Dawoud Bey, in which McDonald showed Bey his work highlighting real people in McDonald’s community performing every-day tasks. This work, which later coalesced into In the Company of Black, at the time made no mention of the subjects’ race.

Bey was dismayed. “It’s kind of weird that you’re not using the word ‘Black,’ [in your descriptions of this work],” he told McDonald. McDonald balked. “You can look at the pictures and see that they are Black people,’ he remembers saying at the time. “’Why do I need to highlight this?’...and this is part of me, again, my whole upbringing of, ‘I’m a proud person, I don’t need to do this.’”

After going back and forth as mentor and mentee, McDonald had a realization. These people, who were not famous, were living lives of great meaning and import, and doing interesting things in the world. “You don’t see these people in movies, you don’t see them on TV, you don’t see them in photographs,” he says. “And that’s when you realize, ‘Oh, you might have something here that has not been seen.’”

McDonald was right. And his key realization, which led him to reference race in his photographs, also provided the foundation for a journey of discovery for the viewers of his work. By presenting people from his life in their day-to-day activities, outsiders were able to be in their company as well. “I thought that would be a way for everyone to make their way into the work,” McDonald says.

His awareness of the world of Black living outside of the false dichotomy of Black misery and Black exceptionalism did one final thing, in conjunction with McDonald’s close reading of James Baldwin. “Because I came through to that thinking through reading James Baldwin, [I also came into] this idea that your history can be a trap. Much like when I started the work, my histories [and supportive upbringing] would've trapped me into thinking that I didn't need to share it with people.” By freeing himself from his own enculturation, McDonald, through his photographs, invites viewers to do the same.

That philosophy underscores McDonald’s work as a teacher. In considering his perspective as an instructor, McDonald says, “[My students] all have these individual histories that is going to come out in their work. It's going to come out in what they think and how they perform or don’t perform… Everyone you encounter is dealing with some kind of history that's affecting the way in which they are interacting with you right now. And we know that art is a good way to excavate the history, to pull things out, pull it apart and look at it.” With this perspective, everyone you meet has the potential to be the most interesting person you’ve met, and everything you do has the potential to be art. As McDonald says, “You always try to push that, so the students understand that as well.” It’s no surprise, then, in listening to the passion with which he approaches teaching, to learn that McDonald was awarded the prestigious 3Arts Teaching Artist Award in 2010.

To students who are interested in following in his footsteps, McDonald has plenty of advice. One key point: do the work you are interested in. “The hardest part is to stay positive,” McDonald says. “So how do you stay positive [in the beginning] when no one's really interested in the work? That's why you have to do the work that you are really interested in, so you won't need an audience as much. You have to validate yourself. And I think that comes out of understanding that your history is yours. It's very personal. It's very unique.” As he reminds us, your unique historical footprint means that you have a story and a perspective that only you can share. And a responsibility to the world to share it.