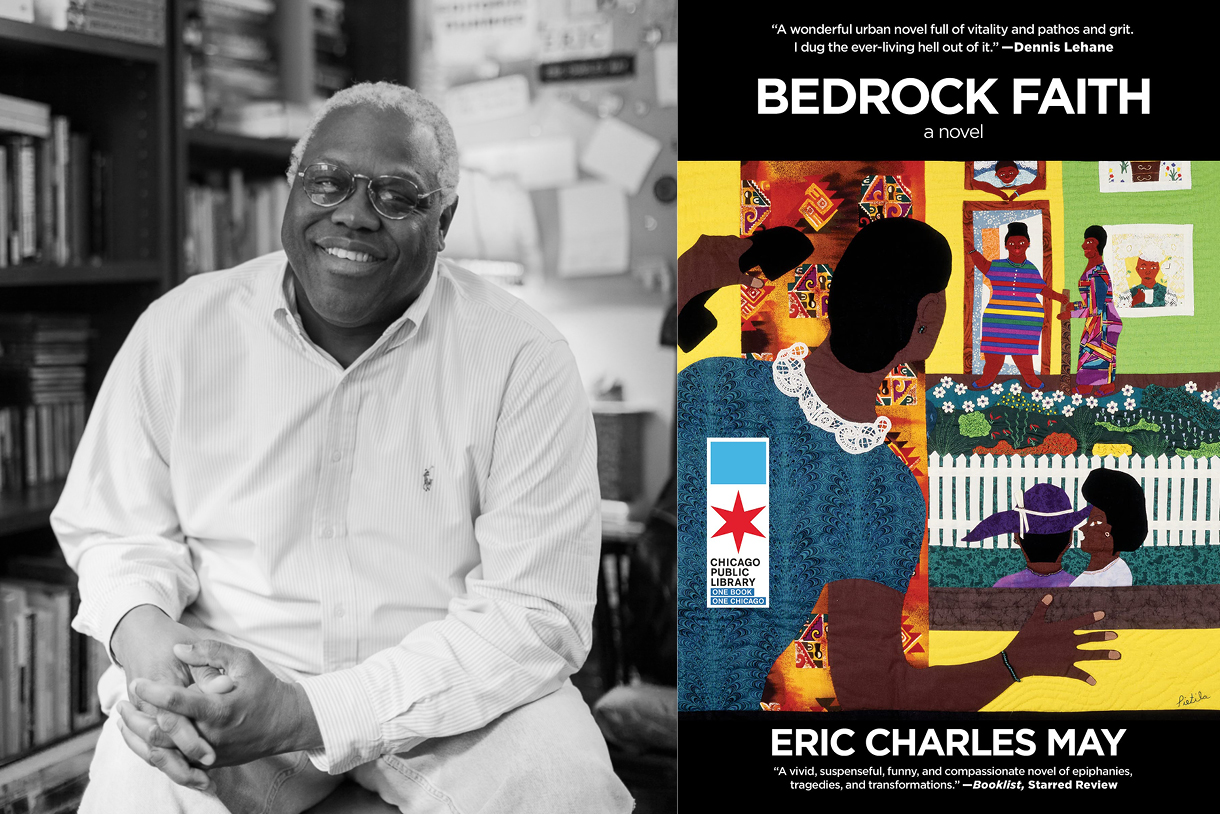 English and Creative Writing Professor Eric May discusses his 2014 debut novel, “Bedrock Faith,” after it was selected for the 20th anniversary of the Chicago Public Library's One Book, One Chicago program.

Like many authors, when Associate Professor of English and Creative Writing Eric May’s first novel was published, he was met with relief along with some worry.

For one, he was ready to introduce Bedrock Faith and its main character, Gerald "Stew Pot" Reeves, to the world. “These fictional beings you’ve lived with imaginatively for so long (in my case 12 years) won’t be taking up any more of your thought time. Which is actually a great relief,” said May. “Of course, the scary part is that upon publication, the characters become the imaginative property of readers, book reviewers, and the general public, who will make of the characters what they will.”

As it turns out, Bedrocks Faith and its vibrant characters did catch the eye of and capture the hearts of many since its release in 2014.

May’s novel, which can currently be reserved at the Chicago Public Library and purchased on the publisher’s website, is a story of resilience and community, set in the fictional South Side neighborhood of Parkland - which draws similarities to the Morgan Park area where May was raised.

In early 2021, Bedrock Faith was chosen by the Chicago Public Library as the latest selection for its One Book, One Chicago program as the 20th anniversary of this citywide "book club" celebrates the theme of “Neighborhoods: Our City's Bedrock.” From September to December, the library hosted virtual programs including discussions, recommended reading lists, digital content, author panels, and web series featuring May to explore Bedrock Faith and the program theme.

Far from a stranger to Columbia, May graduated from the college’s English and Writing program in 1975 and, after gaining first-hand newsroom experience as a reporter with The Washington Post, he returned to his Chicago roots and to the classroom as an instructor in 1985, where he has been teaching ever since.

He elaborates on the opportunities provided by the Chicago Public Library this past fall, as well as his connection with Columbia, and advice he gives creative writing students.

How did you learn Bedrock Faith was selected for the One Book, One Chicago program?

In late April of last year, I received a phone call from Craig Davis (then Director of Adult Services) and Jennifer Lizak, Coordinator of Special Projects and Public Civic Engagement at the Chicago Public Library. They gave me the happy news that my novel, Bedrock Faith, was the Library’s 2021 One Book, One Chicago. Selection. But here’s the thing. They also told me I had to keep it a secret until CPL made the official announcement in September! The only folks I told all spring and summer were my significant other, my publicist, and my department chair. Although I was tempted many a time to let family and close friends know, I managed to keep a lid on it.

You have been part of the Columbia community for quite some time! How has your time at the college, as a student and professor, shaped you into the writer you are today?

I first arrived at Columbia fresh out of high school in the fall of 1971 (skinny with a full head of hair and nary a gray strand in sight), which is also when I had my first encounter with the Story Workshop Method of the Teaching of Writing, which was invented by John Schultz back in the mid-1960s. My first semester here, John was chair of what was then the Writing/English Department and Story Workshop was the method used not only in all the fiction classes but all the rhetoric classes too. The method’s emphases on voice and story permission were incredibly liberating for an aspiring nineteen-year-old artist, and it’s coaching for seeing-in-the-mind and giving the reader-audience the significant visual details were tools that helped me get to my most vivid storytelling. Story Workshop principles have been the foundation of how I approach my own writing, be it fiction or nonfiction, and how I teach writing, both here at Columbia and at summer writing conferences.

Other courses I took as a student also had a very positive effect on my creative writing. My film classes taught me a lot about framing and the use of dialogue. My radio broadcasting classes played an important role in the development of my sense of voice.

Spending most of my life in the creative environment that is Columbia (colleagues as well as students) has been a constant feed to my own artistic efforts. Now that I’m an old fart, I’ve found that being around young people does keep you young (in mind if not necessarily in body). I’m continually energized by the enthusiasm and inventiveness of the student writers in my classes. I see myself as a writer who teaches and a teacher who writes. Insights and discoveries about craft that grow out of my writing process influence what I bring to the classroom, and understandings and recognitions that occur through my interactions with students influence my writing, which leads to still more insights and discoveries in my writing process, which I then bring to the classroom, and so on, and so on.

Why did you first choose to study English and Creative Writing at Columbia?

It was more a case of English and Creative Writing choosing me. I had been on the staff of my high school newspaper and my original plan for Columbia was to major in journalism. After I got here, I became so engaged with creative writing that I eventually switched my focus.

How do you bring your experiences as a writer and former reporter into the classroom as a teacher?

When you write news stories on deadline, there’s no time to sit around waiting for a kindly Muse to land inspiringly on your shoulder. I used to have some sayings written on white index cards and taped to the side of my newsroom computer monitor. One of the sayings was: “Sooner or later you have to sit down and write it.” You can get a decent amount of writing done in even twenty minutes time. Given how busy student lives can be with school and jobs, waiting for that wonderful four or five-hour block of writing time is often a train that never reaches the station. The habit of grabbing the writing time whenever you can, of just jumping right into it, even if for only a few minutes while having a bite of lunch, is an excellent skill for a writer to develop.

As a reporter I learned the hard way that it’s the story fact you didn’t double-check that comes back to bite you in the keister, in the form of you getting something in the story that’s inaccurate. The requirement for accuracy in creative nonfiction is just as great as it is in journalism. You must assume nothing, or as they used to say at the old Chicago City News Bureau: “If your mother says she loves you, check it out.”

Do you have any advice for students who are just beginning in Columbia’s writing program?

You grow as a writer by stretching yourself through trying new things. This as opposed to, “I like reading and writing (fill-in-blank) sorts of stories, and I don’t want to do anything else.” Regardless of what your writing focus is, take courses across various writing genres and forms—fiction, nonfiction, poetry, journalism, screenwriting, literary fiction, magical realism, folktales.

Writing is rewriting. Any book you’ve ever read was probably revised many times. Rewriting isn’t what you do when the writing is bad; it’s just what you do. It’s part of the process. Yes, you try to make the first draft as good as you can, just don’t get bent out of shape if it isn’t perfect. No writer’s first draft ever is. And that goes for the second draft, and the third, and the fourth...

Take advantage of being at one of the most artistically diverse colleges in the world. Few places have the width and breadth of artistic and communication offerings that Columbia has. Take classes in a variety of other art forms and disciplines. Over the course of your student career, you’ll have the opportunity to do storytelling on several platforms—the written page, the stage, radio/podcast, cinema and television, digital streaming, journalism, advertising, public relations, gaming; just to name a few. Take advantage of your proximity to students of other disciplines who can bring their own skillful talents to artistic, joint venture projects.

Is there anything else you’d like to share about your experience with the Chicago Public Library’s One Book, One Chicago programming?

It’s been great. I’ve had the opportunity to meet so many new people who have enjoyed my novel. I’ve also heard from people I hadn’t spoken with in years. For example, in November my high school French teacher called on my office phone to congratulate me and say how much she enjoyed the book. I also had a chance to do a CPL promotional video and a Zoom Book Club meeting at the Walker Branch Library in my old neighborhood of Morgan Park. Walker Branch was the library I went to as a boy. A significant part of my early imaginative life grew out of books that I borrowed from there. To see my novel on a shelf in the room where, as a kid, I used to sit and read by the radiance of sunlight coming through the turret windows, is a real thrill.

So, what’s next for May? He is currently working on another novel, he says, in which a few Bedrock Faith characters could make an appearance. In the meantime, he continues to share his knowledge and passion for storytelling with Columbia students who hope to follow in his footsteps.