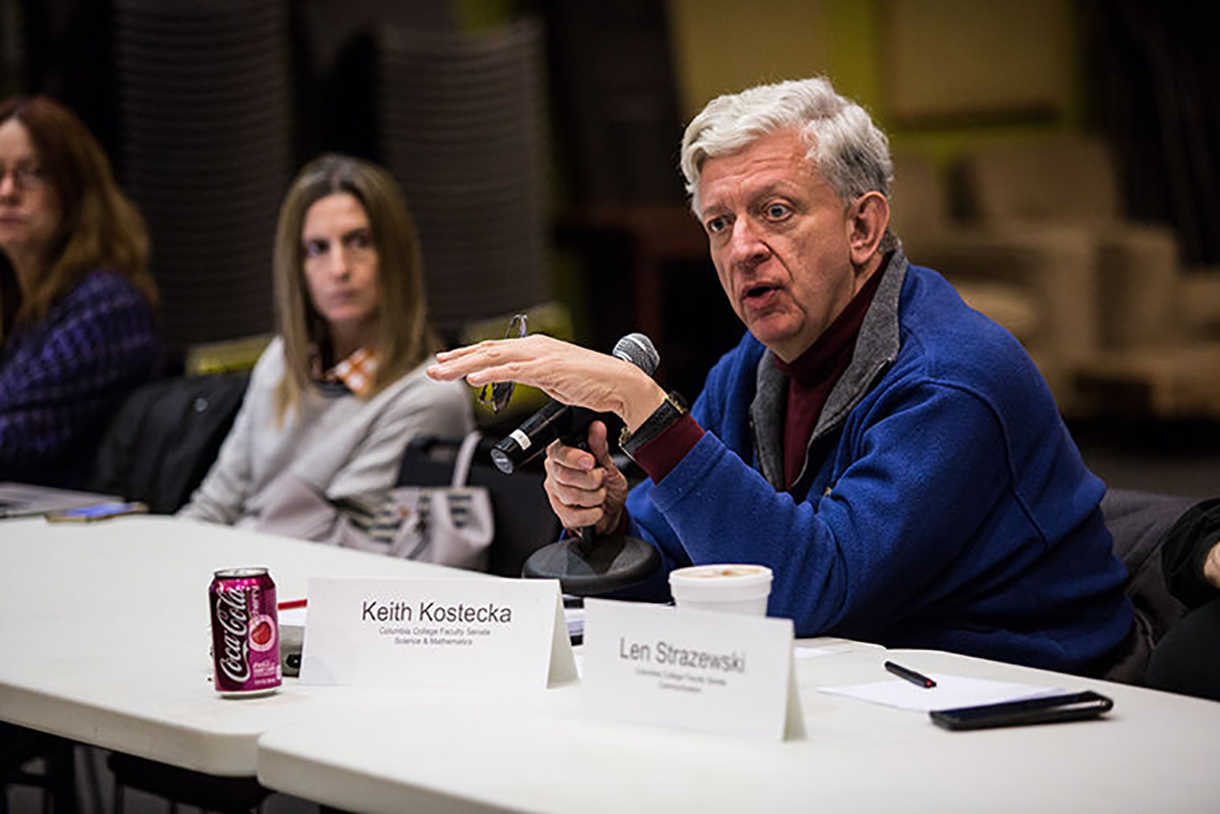 Keith Kostecka
Associate Professor Keith Kostecka on his intrinsic role in Columbia’s science community and beyond.

In his time at Columbia College Chicago, Associate Professor of Chemistry and Environmental Science, Keith Kostecka, has seen – and played a significant role in – much behind-the-scenes change to the college’s Science and Mathematics Department. Luckily for the campus community, he has much more in store.

When Kostecka joined the college in 1989 in an academic staff position, science had been a passion of his for years. Discovering chemistry as an interest in high school, he went on to major in Chemistry at Benedictine University, and soon after, earned a masters from the University of Illinois at Urbana-Champaign. Later, he went on to get his doctorate from the University of Illinois at Chicago. He has also remained a member of the American Chemical Society for more than four decades.

Kostecka currently teaches two courses – Liberal Arts Chemistry and Environmental Science – but through his tenure he has brought to life, or has been involved with significant revisions in, nearly 15 different courses at Columbia. For instance, after working with Game Design and Interactive Arts and Media faculty, Kostecka developed the college’s Introduction to Nanotechnology course, which is to be offered in Fall 2022.

A big sci-fi buff, he even began teaching a Chemistry of Science Fiction class – initially geared toward students studying creative writing or film, but soon one that became a favorite among all students needing to meet Columbia Science course requirements.

But no matter how many times Kostecka teaches a class, he always strives for perfection in its curriculum. At the end of every semester, he makes a habit of evaluating each course. “I think a mark of a good instructor, whatever discipline they may be in, is somebody who's always willing to change things,” he says. “Maybe there's something that's newsworthy. Maybe it's something they just don't like, for that matter. Or maybe something needs to change according to what student interests happen to be.”

In that respect, he’s been following his own advice from the very beginning. In the ‘90s, when students were concerned about the depleting ozone layer, he made that issue central to his lessons. Today, his courses are focused more on climate change and current events, such as the war in Ukraine and its environmental impact.

Students have come to Kostecka with ideas for independent study projects over the years – from testing cadmium levels in green leafy vegetables, to examining the chemical composition of gasoline. At the height of the Bulls championship reign and Michael Jordan’s popularity in the early ‘90s, students expressed interest in determining the makeup of Gatorade for a “truth in advertising” lesson – a project which inspired Kostecka, and led him to having a paper published about the instrumental techniques used to look quantitatively at the potassium levels of the beverage. Above all else, Kostecka loves to see science students incorporate their own personal interests and ways to creatively present their take on course material. Over the years, he has seen final projects in the form of paintings, videos, handmade and bound books, and illustrations, just to name a few.

By the time he is ready to retire, Kostecka says, he will likely have taught a version of environmental science at Columbia up to 100 times! Through each semester, his advice for students remains: “Keep your eyes and ears open, stay committed, always question things. Don't go ahead and accept things for what they are and look at the broader picture of the world.” Kostecka says if there is something in science that interests you, whether it’s Environmental Studies, Biology, or Nutrition as examples, picking up a minor can make a world of difference when starting a career.

As long as interest in Liberal Arts and Sciences continues to expand as it has, Kostecka says exciting opportunities are on the horizon for Columbia’s fall curriculum and beyond, including investments in new technology for the department and hybrid courses with Fashion Studies. Perhaps even a revival of the Green Roots club, for which he formerly served faculty advisor. With professors like Kostecka paving the way, the future of chemistry education at Columbia remains bright.