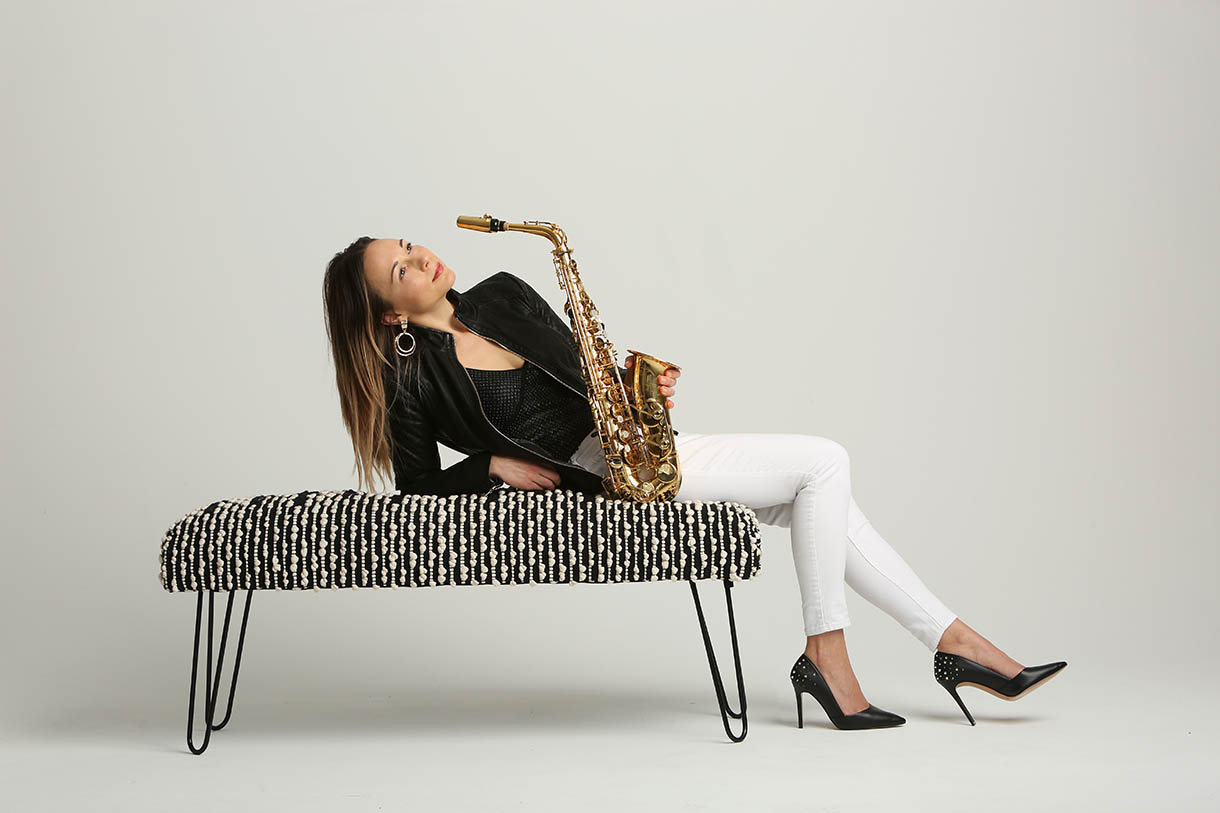 For Sharel Cassity, a private music instructor in Columbia College Chicago's Music Department, music has long been at the heart of her most meaningful relationships and most cherished memories. “I heard music in the home as long as I can remember,” Cassity says. “My dad would put me on the piano in the little baby carrier and practice the piano. He would take me to his gigs and put me next to him on the stage. So, since I can remember, I’ve heard music and I’ve always loved music.”

Almost as soon as she was physically capable, Cassity began playing piano. “I thought I was going to be a concert pianist, which is what my dad’s sister is,” Cassity says. “But I also saw my dad play with jazz trios…and I just started begging for a saxophone when I was about eight.” The Christmas that she turned nine, Cassity got her wish. And by the time she was 14, she had decided that she wanted to dedicate her life to jazz.

Dedicate her life she did. She earned her BFA from The New School for Jazz & Contemporary Music in 2005, and was selected to attend The Juilliard School with a full scholarship for her Master’s in Music. She worked with some of the most culture-shaping musicians in the field including Jennifer Hudson, Natalie Merchant, Aretha Franklin, Vanessa Williams, Jimmy Heath, Herbie Hancock, Christian McBride, and more. When opportunity felt stale, she took creative leaps and found new places to bring the music: from New York to the Middle East to Chicago, she kept finding ways to elevate her sound, and develop her musicianship. She started a record label, “ReIsha Music,” led bands, and released “Just for You” (2008), “Relentless” (2009), “Manhattan Romance," (2014), and “Evolve” (2018).

And then, abruptly, in early 2019, everything started feel—wrong. Cassity fell ill with a mysterious condition that doctors failed to diagnose. Soon, she was so sick that she didn’t know if she would be able to continue daily life, much less follow the music. She was in the middle of producing her critically acclaimed album, “Fearless,” while also hearing terrifying things from her doctors. “The doctors were telling me, ‘Well, you have a 50/50 shot. You could improve, or you can just be paralyzed in six months or a year,’” Cassity recalls. She had a choice: She could give in, or she could persist.

“I kept writing music,” Cassity recalls. “And I kept playing the saxophone, I just changed my equipment so that it was very easy to play. And along with these changes came a certain amount of acceptance. I thought, ‘I might not be able to have my best sound right now,’ but I had to be grateful that I was playing at all.” Centering on that gratitude lifted her spirits and gave her strength to finish the album. And soon, she did start to feel better, finding herself on the favored side of the 50/50 divide.

Cassity kept teaching during this time as well. Early lessons from her heroes, Dizzy Gillespie, James Moody, Jimmy Heath, had imparted a key lesson stronger than any fear that accompanied the mystery illness that was eventually diagnosed as Lyme disease. “Gillespie, Moody, and Heath were all famous bebop musicians,” Cassity says, “and they taught me that you have to pass this music on…I want to pass the music forward to everyone I can who’s willing to receive it.” From recording music to cultivating talent in the next generation, Cassity was determined to do just that.

As her health continued to improve over the course of 2020, Cassity found renewal and strength through her discipline. “I've been able to practice, and compose, and kind of keep feeding myself through the music,” Cassity says. “The music, as long as you keep searching and stay curious, the music never gets old.” As a performer, this mindset kept her strong. And as a mentor to Columbia students, it kept her relatable, honest, and forthright. “When I see the students, whatever level they come in at, I see what potential is there and I really try to build that up as much as I'm able to. And it's the most rewarding thing to me when I see a student succeed at something,” Cassity says. It is her primary goal, she says, to elevate their skills and their awareness of what it takes to succeed in a competitive industry.

In Cassity’s classes at Columbia, which range from Foundations courses to upper-level offerings, students can expect to be challenged. “It’s my job to teach students that if they just do the basic level of coursework, that that's not going to make them an exceptional musician,” Cassity says. “The ones who do graduate and are very successful are the ones who always put in the extra mile.” She supports and facilitate those creative endeavors and is proud to be a resource for her students as they embark on the miles untrodden by the masses.

Today, Cassity is also at the helm of the non-profit Jazz Up Institute, which she started in 2020 to give “diverse jazz students a platform to improvise and learn together regularly in Chicago's NW Suburbs.” Cassity is committed to helping high-performing high school students succeed from the moment they set foot on a college campus or in early professional environments. “The idea is to take the high-level students who want to play jazz for a living and use what they know to make them better,” Cassity says. “Instead of throwing a lot of theory and repertoire at them, teach them how to play so that they sound like they're really at a professional level with what they already know.”

And to students who are just starting out, Cassity is ready and willing to offer them the first step. “I would give them a list of albums and I would say, ‘Listen to these until you can sing the solos,’” she says. Then the names come pouring out: from Miles Davis’ “Kind of Blue” to Cannonball Adderley’s “Somethin’ Else,” to Charlie Parker at Massey Hall to Lester Young (“Any Lester Young album”), Cassity knows the company to keep in the world of Jazz. After all, she’s among the greats. And she’s here to foster greatness in the next generation.