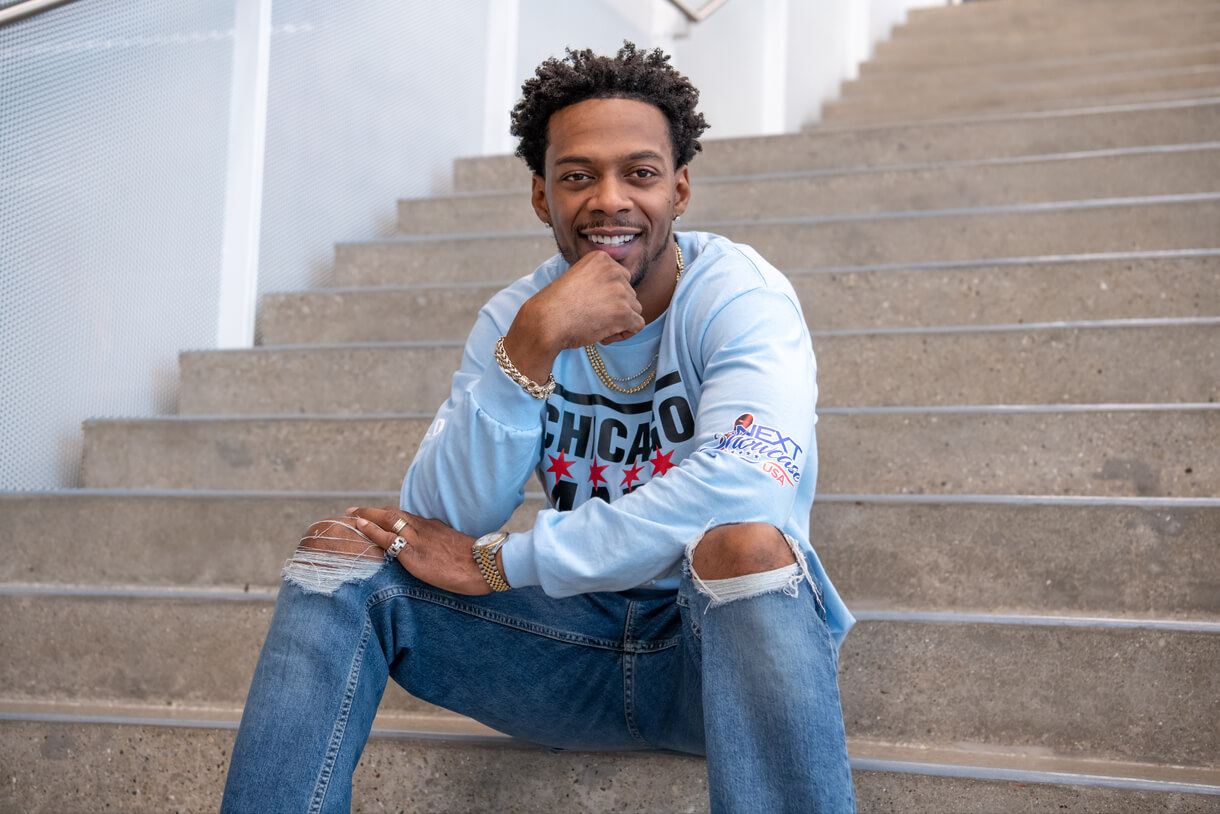 How the multi-platinum artist carved his own path

For Marcos Palacios, professionally known as Kosine, music has always been at the heart of his interests. “I started piano at six, sax in the fifth grade, drums in eighth grade…I was literally obsessed,” he remembers. His passion for creating music only intensified as he grew older. By the time he was in college at Florida A&M University in Tallahassee, he knew he needed to find an institution that would allow him to earn a degree in Music Business. “I saw Columbia as a way to really dig into my concentration,” Palacios says of his decision to transfer.

At Columbia College Chicago, Palacios found mentors and working professionals dedicated to his success. “[Associate Professor of Instruction] Beth Ryan, in my opinion, is one of the greatest things ever to happen to this school,” Palacios says. “If it wasn’t for her, I wouldn’t have a Ted Talk [or] had support for my music industry conference.” He also recalls his relationship with former Columbia College Associate Professor James “Kimo” Williams as being instrumental to his success. “I was not like other students [when I started at Columbia], and I needed someone who knew to challenge me,” Palacios says. “He did, and then he hired me after graduation.” He also cites the important work done by Executive Assistant to the President Yvonne Sode in helping his work get the visibility it needed at key moments.

After graduation, Palacios had two goals: first, to give back to the community that gave so much to him and second, to achieve his dreams of producing music on a grand scale. He got started right away teaching music production courses at Columbia for two years and hosting the Music Industry Conference. “I never wanted to be the guy who made it and never gave back. So [I thought], ‘I know what I’ll do, I’ll give back before I make it!’” In teaching, Palacios found a way to introduce other Columbia College Chicago students to making beats, mixtapes, and learning from chart-making guest speakers currently working in the business.

By 2009, Palacios followed through on a business plan he developed at Columbia, and co-founded a music production duo called Da Internz, named for an axiom he discovered young: “I’ve always known teaching is learning,” Palacios says. He soon started producing and writing for some of the biggest names in music including Nicki Minaj, Big Sean, Justin Bieber, Nas, and Rihanna. “Every song has its own story,” Palacios says. “Some hits were accidents. Some of these people I never met—they just heard my song, fell in love, and sent money. Other times I was able to connect with artists in the studio and truly listen to them…I ask questions and listen critically. Usually, the song is in their answers.” His work exploded onto the scene and at the time of publication has earned him nine GRAMMY nominations.

Still, life hasn’t always been easy for Palacios. His Ted x Columbia College Chicago talk “How to Rewrite Your Life,” was in part inspired by the grief and trauma he experienced when he lost his mother, a great supporter of his work, to pancreatic cancer. Instead of letting it tear his world asunder, Palacios thought, “If my worst nightmare could come true, so could my wildest dream.” He persisted. Years later, after incredible success, Palacios remembers, “I went broke…I felt like I was black balled from the business. I was crazy depressed, but then I remember my mom always telling me I had many talents and that I was a well-rounded individual.” He used the temporary lull in his music career to successfully branch out into television (credits include “Star” on Fox and “The Encore” on BET), hosting, and soundtrack production. He also started working as an on-air personality for Apple Music for a show called the “Apple Music 1 List,” which drops every Saturday from 8pm to 10pm. “Little by little these things started to pay off,” Palacios says. “What I’m learning in life is [that] I get return wherever I place my energy and efforts.”

Today, Palacios is looking forward to more music dropping, working with his label, Gourmet Ratchet Records, and signing new artists. To other Columbia students interested in following in his footsteps he has a simple piece of advice: “If you remain a student and fall in love with the journey, you’ll be fine.”