Photography Student Erica McKeehen Tests the Limits of Our Assumptions 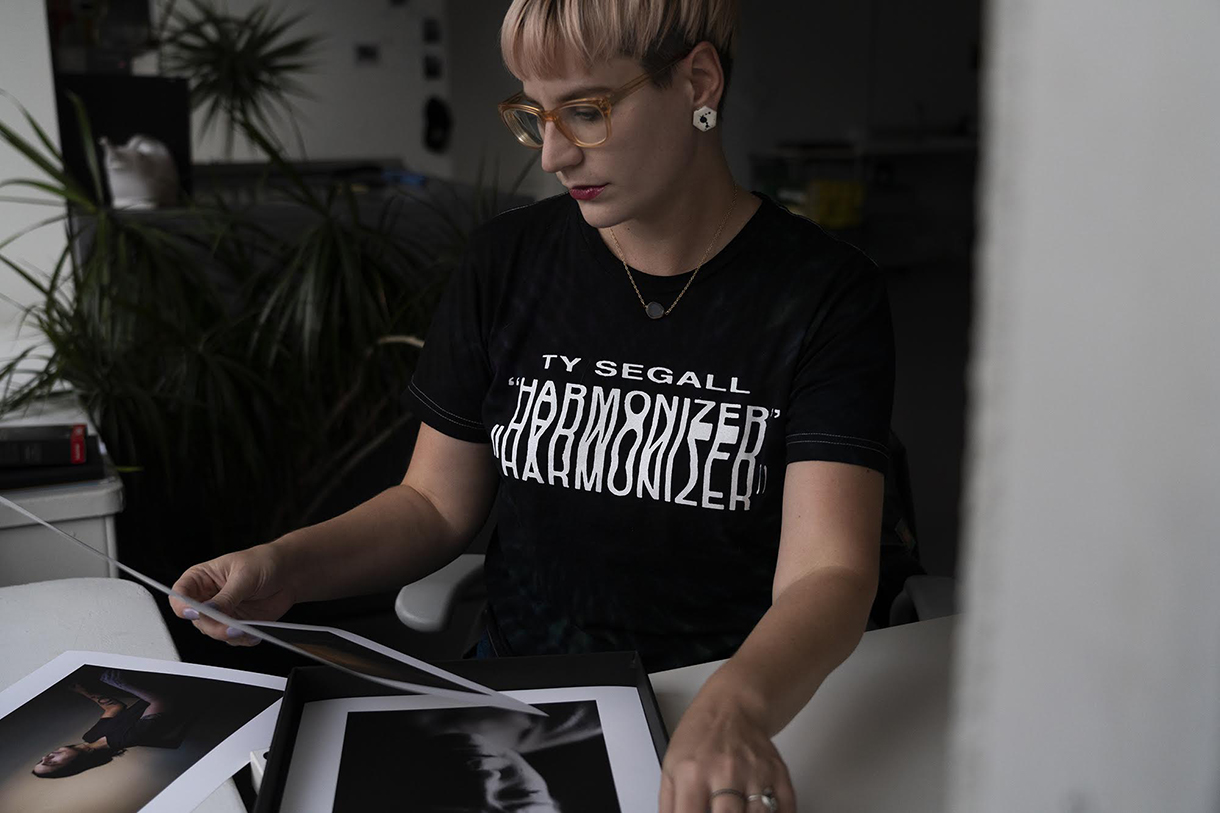 Growing up in rural small-town Ohio, Erica McKeehen found freedom in listening to her father’s cassettes, CDs, and reading copies of his Rolling Stone magazines. In particular, she was drawn to the photographic spreads featuring her favorite artists. “I’ve long been obsessed with the role of photography in shaping how we perceive performers,” she recalls. Over time, McKeehen’s interest in portraiture and performance intensified, as did her questions about why society celebrates certain figures and vilifies others.

A performer as well as a photographer, McKeehen has always felt at home in burlesque, a genre that encourages the proud sexual expression of real bodies in a safe space on stage. By 2016, McKeehen began making work about burlesque, photographing a friend of hers who was a performer as well. “She would bring hand-crafted looks that she put together for the stage to my apartment, and we would make photographs of her posing in the various rooms of my humble one-bedroom,” McKeehen remembers. The experience was transformative; it was the beginning of dedicating time to two crafts: photography and burlesque, and the first foray into a journey that would lead to two master’s degrees at Columbia College Chicago and a fulfilling career in a culture-shaping discipline.

McKeehen began performing in burlesque in March of 2017, shortly after President Trump was elected. During a difficult time, she found healing in the fact that “many acts addressed that difficult reality, through elaborate artistry and a range of emotional tones.” Burlesque gave powerful voice to dissidents challenging public narratives about femme-presenting people’s value, bodies, and abilities.

By 2019, McKeehen knew that she wanted to pursue her art vocationally. She came to Columbia College Chicago first for an MA in Arts Management and took a job at the Museum of Contemporary Photography. “Through working at the museum and meeting all the curatorial assistants who were grads in the Photography program, I knew the next step for me was to apply for my MFA once I graduated,” McKeehen says. With mentors from the center of Business and Entrepreneurship, Arts Management, and Photography, McKeehen feels supported in her pursuit of work that investigates and interrogates not only burlesque but also sex work.

For McKeehen, there is a clear connection between the empowering elements of burlesque and the widely unacknowledged but no less empowering elements of sex work. “Despite it being 2022, and despite clear markers of social progress, femme-representing people are expected to show up in society in ways that the patriarchy determines and reinforces,” McKeehen says. “And when they take their sexuality into their own hands and use it to their advantage or to pay their bills, that real work is considered demeaning and lesser-than. The confidence and skills needed to perform sexuality are not acknowledged,” she notes. McKeehen’s work, which she characterizes as a modified documentary style, challenges the idea that sex work is inherently exploitative or transgressive. She uses interviews as well as her photography to present the crucial context for action within which her subjects operate.

The power and promise of McKeehen’s work have been acknowledged by Columbia, which awarded her the Stuart Abelson Graduate Research Fellowship to travel abroad to Spain in the summer of 2022. There, McKeehen plans to further explore notions of identity and sexual expression while continuing to work in portraiture.

For those artists who aspire to follow in McKeehen’s path, she has some advice. “Harness your passions and the things you need to share and find power in both,” McKeehen says. “If photography is your medium, after you have a foundational visual language with which to express your ideas, push yourself, make yourself uncomfortable at times, find people you can be truly honest with as your mentors and supporters, and be persistent.” That persistence, as McKeehen’s career reveals, creates opportunities for growth, professional advancement, and, most important, space in the culture to create necessary change.