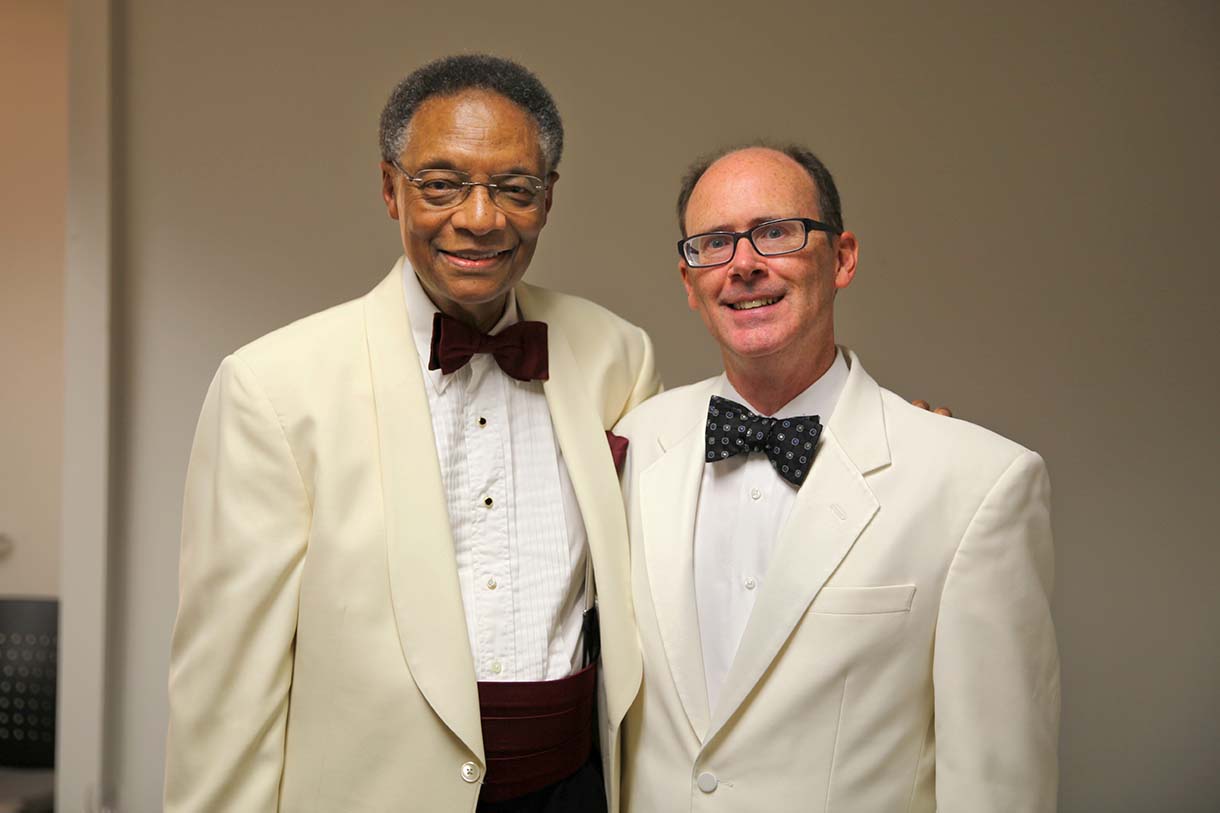 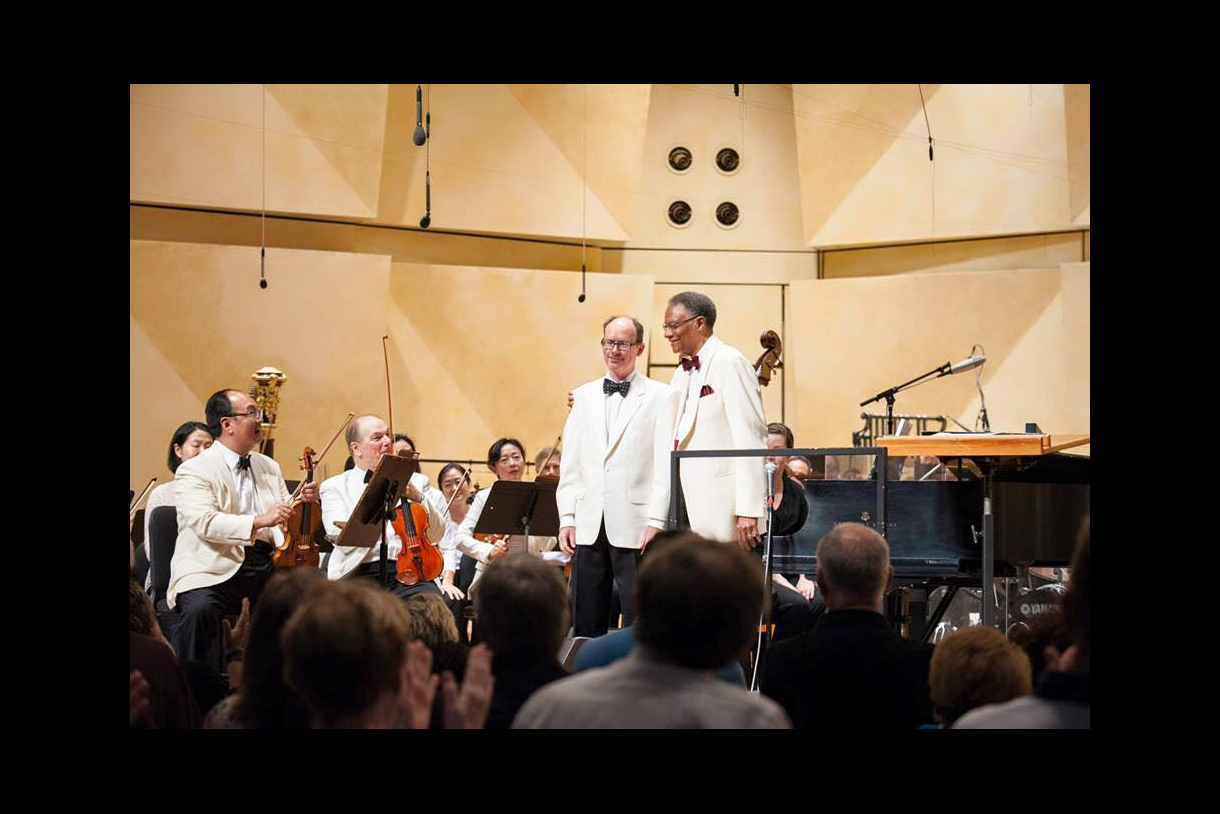 Scott Hall (standing, left) with Ramsey Lewis (standing, right) at the Hall-conducted CSO premier of Concerto for Jazz Trio and Orchestra by Lewis and arranged by Hall. Photo credit: Michael Coakes.
Scott Hall, professor and coordinator of contemporary musicianship and jazz at Columbia, reflects on his collaborations with Ramsey Lewis and the legacy Lewis leaves behind.

Last week, Chicago lost one of its greatest and most well-known musicians—jazz legend and Grammy-winner Ramsey Lewis. Lewis, a pianist and Chicago native, first gained fame in the 1960s as a crossover artist when his jazz hit “The ‘In’ Crowd” topped the pop charts. Over the years, Lewis was a staple in Chicago’s music scene, and he served 25 years as the artistic director of jazz at the Ravinia Festival in Highland Park, Ill. Scott Hall, professor of instruction and the coordinator of contemporary musicianship and jazz in Columbia’s Music department, had the privilege of knowing and collaborating with Lewis, who he first met as a graduate student in the 1990s and later as arranger and conductor for Lewis’s compositions.

Hall is a classically trained trumpeter known for his work as a jazz conductor, performer, arranger, and producer as well as an educator. Below, he reflects on his relationship with Lewis and the legacy he leaves behind.

How did you meet Ramsey Lewis?

He was an honoree when I graduated from the master’s program in Jazz Studies at DePaul University back in 1993. So, I met him then, but I didn't start working with him until the mid 2000s. And the reason that happened was because he was to be a guest with the Chicago Jazz Ensemble, a professional repertoire ensemble that was in residency at Columbia; it was a very unique kind of situation, a professional group housed within a college. I started working with that group before I started teaching at Columbia under the direction of founder William Russo and continued as music director under the direction of Jon Faddis. We always had guest artists tour with us or play concerts around Chicago, and Ramsey was going to do a concert with us at Ravinia.

One day, I get a call from Ramsey, and he's looking for somebody to arrange a couple pieces for that concert. As I’m an arranger, I said I would be happy to help. We hit it off immediately. We're both classically trained jazz musicians. And we just clicked right away.

What other projects did you work on together?

When he was artistic director of jazz at Ravinia Festival in Highland Park, Ill., he was encouraged by Welz Kauffman to compose new music. And so, as I'm an arranger/orchestrator/composer, I was able to help facilitate these pieces for various ensembles. We worked on many projects together, including music for the Joffrey Ballet, Turtle Island Quartet, Ramsey Lewis' Freedom Collection and the Abraham Lincoln celebration “Proclamation of Hope,” Ronny Scott's Big Band in London, and the Concerto for Jazz Trio and Orchestra with the Chicago Symphony Orchestra (CSO). For the CSO show at Ravinia—Ramsey’s first and only performance with the CSO—I was arranger and conductor.

We were a good team and spent many years working together in preparation for each new commission. I always tell my students to prepare yourself to say "yes." And the opportunity to work with Ramsey all just came out of the sky. I often wondered ‘why am I the lucky one?’. But I think that he saw I had the skills, and we learned from each other.

How did Ramsey Lewis influence you?

He was a true gentleman. Everything about him was positive, and that really rubbed off on me. Growing up, I had a lot of really great music teachers, but their teaching style could be less than positive.And that influenced me in not such a great way. Ramsey helped me move in a different direction—from that sort of disciplinary-style of teaching and getting things done to being more open and forgiving. Ramsey and I spoke often about music education and specifically how we teach at Columbia. Our music program and my teaching philosophy were greatly influenced by Ramsey.

I learned a lot about music from him. He knew how to grab an audience. When we were collaborating, it was really important that our music had a wide dynamic range. The music had to have a lot of hills and valleys. And I have been able to transcend that approach to my students.

He was always very good at making decisions. He achieved so much in his lifetime. And that was really helpful for me. I think that's what has helped me trust my intuition more.

Why do you think your collaboration was so successful?

Because of our similar musical backgrounds, we could communicate about the elements of music in a contemporary manner. With a strong classical tradition, we drew from those experiences to inform our modern approach to new music. Because of that, we were able to create music with a sound of its own.

How would you like Ramsey Lewis to be remembered?

I think one of the most important things is that he supported education and supported youths who didn’t have access to music education. He helped start the Ravinia Jazz Scholars Program, which was designed to support students who had the talent but didn't have the resources. Scholars in that program receive intensive year-round training by the jazz mentors, as well as scholarships and opportunities to perform.

Any final thoughts about Ramsey and your relationship with him?

Ramsey was like a father to me during our time together. He invited me into his circle and trusted me with preparing his music on many projects. I am so grateful to him for the opportunities and enjoyed our moments together.