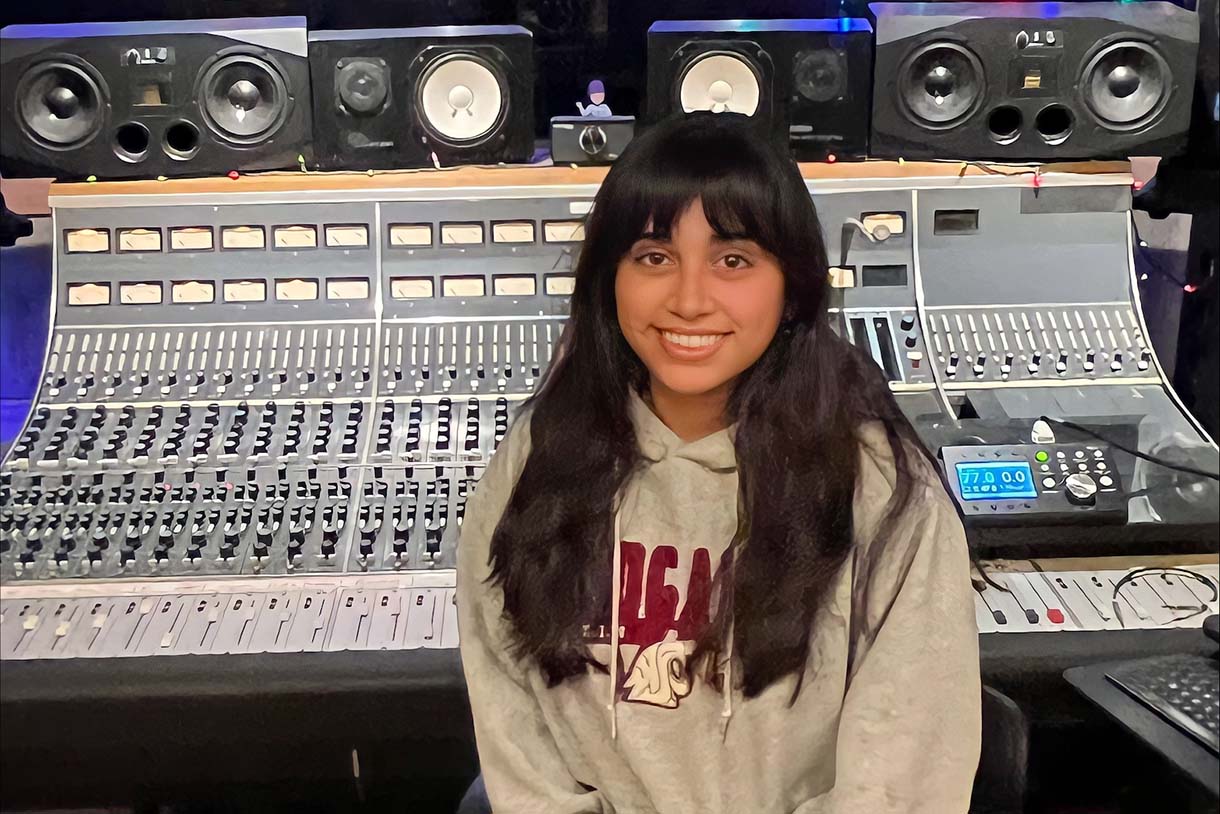 Driven by a love of music and travel, Raina Villareal ventures to LA to meet sound professionals and explore sound engineering careers.

“I didn’t know what I wanted to do, but I knew I wanted to do something in music,” says Raina Villareal, a senior majoring in audio arts with a minor in music business. Another dream for this Chicago native: Travel.

Villareal’s two loves — music and travel — came together this year when Villareal became the first Audio Arts and Acoustics student to attend Columbia College Chicago’s Semester in LA (SiLA) program, an experience that brings students and LA entertainment industry professionals together via classroom activities, networking, and internships. While most SiLA students study film and television, opportunities also exist for students pursuing careers in other entertainment industries, such as communication, business, and sound engineering.

Villareal attributes her love of music and her passion for travel to her family. Raised in Chicago’s Bridgeport neighborhood, Villareal visited Mexico and almost every state in the U.S. as a child. As for music, her grandfather performed in a Mariachi band, often writing his own songs. And her father, a big music fan, ensured his daughter grew up surrounded her with music. “In the beginning, I wanted to be a singer, but I never had the voice for it,” she recalls.

During her junior year of high school, the documentary “The Defiant Ones,” inspired her to consider another option. Recounting the careers and partnership of music legends Dr. Dre and Jimmy Iovine, the documentary introduced her to the world of sound engineering.

When college time rolled around, friends and family suggested that Villareal consider Columbia because of its respected audio arts and acoustics curriculum. While she dreamed of going to school in LA, the timing wasn’t quite right, and she embraced the idea of Columbia and the many opportunities it afforded her.

During her first year, Villareal heard about SiLA. And she eventually discovered that she could have the best of both worlds: A Columbia education and a sojourn to LA where she could engage with the city’s recording scene.

Last fall, she took a flight to LA and her west coast adventure began.

In LA, Villareal enjoyed the mentorship of Columbia alums in the audio and recording industry. This included BriElle Achterhof ’18, a dialogue recording/editing engineer who currently works at an animation studio. Villareal appreciated Acherhof’s insights as a woman working in what has traditionally been a male-dominated field. While that is changing with schools like Columbia bringing more women into the sound engineering pipeline, Villareal welcomed Achterhof’s advice on navigating the industry.

Villareal also enjoyed her internship at a recording studio in LA called Kingsize Soundlabs. “You open, you close, you take care of the clients,” Villareal says, describing her work there. “I think the best thing, though, is just observing and assisting on the recording sessions.” When not adjusting mics or setting up, Villareal used the opportunity to network — and learn from — artists and sound engineers.

“I wanted to come out to LA to make a name for myself. That had always been the goal. So, I just pretty much wanted to talk to as many people as possible in my industry as I could,” she says. “I met so many cool people … I'm going remember SiLA forever. I’m so excited for where my future will take me.”

Now home, Villareal looks forward to her final semester at Columbia and her internship at Gravity Studios, a recording facility in Chicago. After graduation, she sees the value in building the foundation of her recording studio career in Chicago. She doesn’t plan to stay for too long, though. She wants to return to LA in her professional future — and perhaps venture even further. “I want to incorporate traveling within my career and make a bunch of records everywhere in the world.”

Are you a student interested in spending a semester studying, living, and working in Los Angeles? Attend one of the upcoming virtual info sessions for the Semester in LA program.