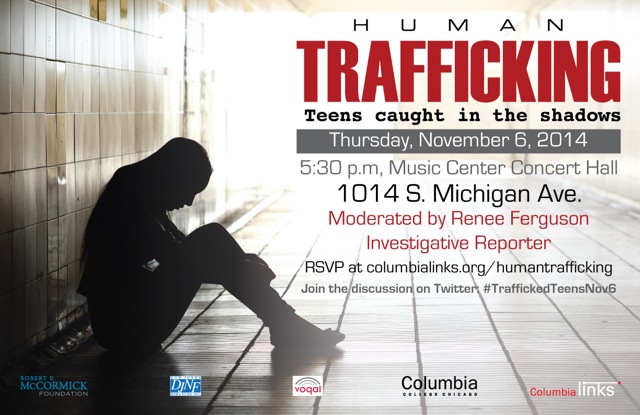 Reports spotlight problems, lack of resources in responding to shadowy enterprises and new legislation to combat it

CHICAGO (Nov. 5, 2014) – The Columbia Links teen journalism program at Columbia College Chicago will host a town hall meeting, "Human Trafficking: Teens Caught in the Shadows", Thursday, Nov. 6 at 5:30 p.m. to discuss their findings on the prevalence of human trafficking in Chicago.

According to the UIC Jane Addams Hull House for Social Research and Policy, Chicago is one of the major hubs for sex and labor slavery in the U.S., and the teen journalists look at the stories behind the numbers. Some of these include:

Media is invited, and the event is open to the public. Reservations required. Please RSVP at columbialinks.org/humantrafficking.

Columbia College Chicagois an urban institution that offers innovative degree programs in the visual, performing, media and communication arts for more than 10,000 students in 120 undergraduate and graduate programs. An arts and media college committed to a rigorous liberal arts curriculum, Columbia is dedicated to opportunity and excellence in higher education. For further information, visitwww.colum.edu.