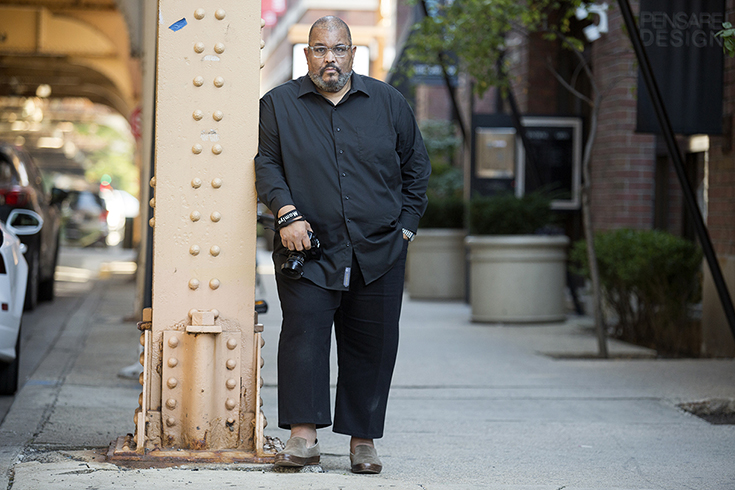 CHICAGO (Oct. 11, 2017)—Columbia College Chicago Photography Professor Dawoud Bey today received a 2017 MacArthur Foundation Fellowship for his accomplishments in the field of photography. The Fellowship is awarded to individuals in a variety of fields who have shown exceptional originality and dedication to their creative pursuits.

“Being named a MacArthur Fellow is a profound honor,” said Bey. “It is both an affirmation and validation of what I have worked hard to achieve these past forty years. To know that my efforts to visualize and elevate the conversation regarding the lives of ordinary and often marginalized peoples through my work has been recognized at the highest levels is deeply gratifying. The MacArthur Fellowship provides even greater support for that work.”

Bey began his career in 1975, photographing in the streets of Harlem, New York. The five-year project was later exhibited in his first solo exhibition, Harlem, USA at the Studio Museum in Harlem in 1979. His photographs have been widely published and exhibited extensively worldwide at such institutions as the Art Institute of Chicago, the Barbican Centre in London, the Cleveland Museum of Art, the Los Angeles County Museum of Art, the Detroit Institute of Arts, the High Museum of Art in Atlanta, the National Portrait Gallery in London, the Bibliothèque nationale de France in Paris, and the Whitney Museum of American Art, among many others.

“Professor Bey’s artistic vision and skill, and compelling and powerful photography, have documented our culture and celebrated the depth of character of ordinary, everyday life,” said Kwang-Wu Kim, president and CEO, Columbia. “A MacArthur Foundation Fellowship recognizes all the significant contributions Professor Bey has made to the world through art. He represents what Columbia aims for its students to become: culturally aware thinkers and makers, diversifying and expanding the realm of arts and media, and our communities. Columbia is very proud that Professor Bey has received this prestigious award.”

Bey is currently at work on Station, a group of works referencing the Underground Railroad in Ohio that will debut at FRONT International: Cleveland’s Triennial for Contemporary Art in 2018. In Fall 2018, the University of Texas Press will publish a monograph of his work “Dawoud Bey: Seeing Deeply, 1975-2017.”

In his most recent project, Harlem Redux, Bey returned to Harlem 40 years after his Harlem, USA project, to look at the effects that gentrification is increasingly having on the storied African American community. The large-scale color photographs are a visualization of the evolving social spaces within the Harlem community, which is experiencing rapid gentrification, and engage the themes of memory, loss, absence, displacement, and transformation. These photographs continue his recent ongoing interest in excavating the social histories embedded in place.

Another recent project, Birmingham Project, evoked the tragic events of September 15, 1963, when four black girls and two boys were killed in Birmingham, Ala., in acts of racist violence. The diptych portraits depict young black children who are the ages of the young people killed that day, and women and men the ages they would have been fifty years later. A video work 9.15.63, that is part of this project, evokes the quiet Sunday morning turned horrifically tragic.

He has been honored with numerous fellowships and honors over the course of his career, including the John Simon Guggenheim Memorial Foundation Fellowship and a fellowship from the National Endowment for the Arts. He is also a 2015 United States Artist Fellow. He received a BA in the Arts from SUNY-Empire State College, and an MFA from Yale University School of Art. He is represented by Stephen Daiter Gallery in Chicago, Mary Boone Gallery in New York, and Rena Bransten Gallery in San Francisco.

Bey is the second faculty member at Columbia to receive the MacArthur Foundation Fellowship Award. Aleksandar Hemon, a 2004 MacArthur Fellow, joined Columbia's English and Creative Writing Department in 2015 as a faculty member and Distinguished Writer-in-Residence.

Columbia College Chicago is a private, nonprofit college offering a distinctive curriculum that blends creative and media arts, liberal arts, and business for nearly 7,500 students in more than 100 undergraduate and graduate degree programs. Dedicated to academic excellence and long-term career success, Columbia College Chicago creates a dynamic, challenging, and collaborative space for students who experience the world through a creative lens. For more information, visit www.colum.edu.