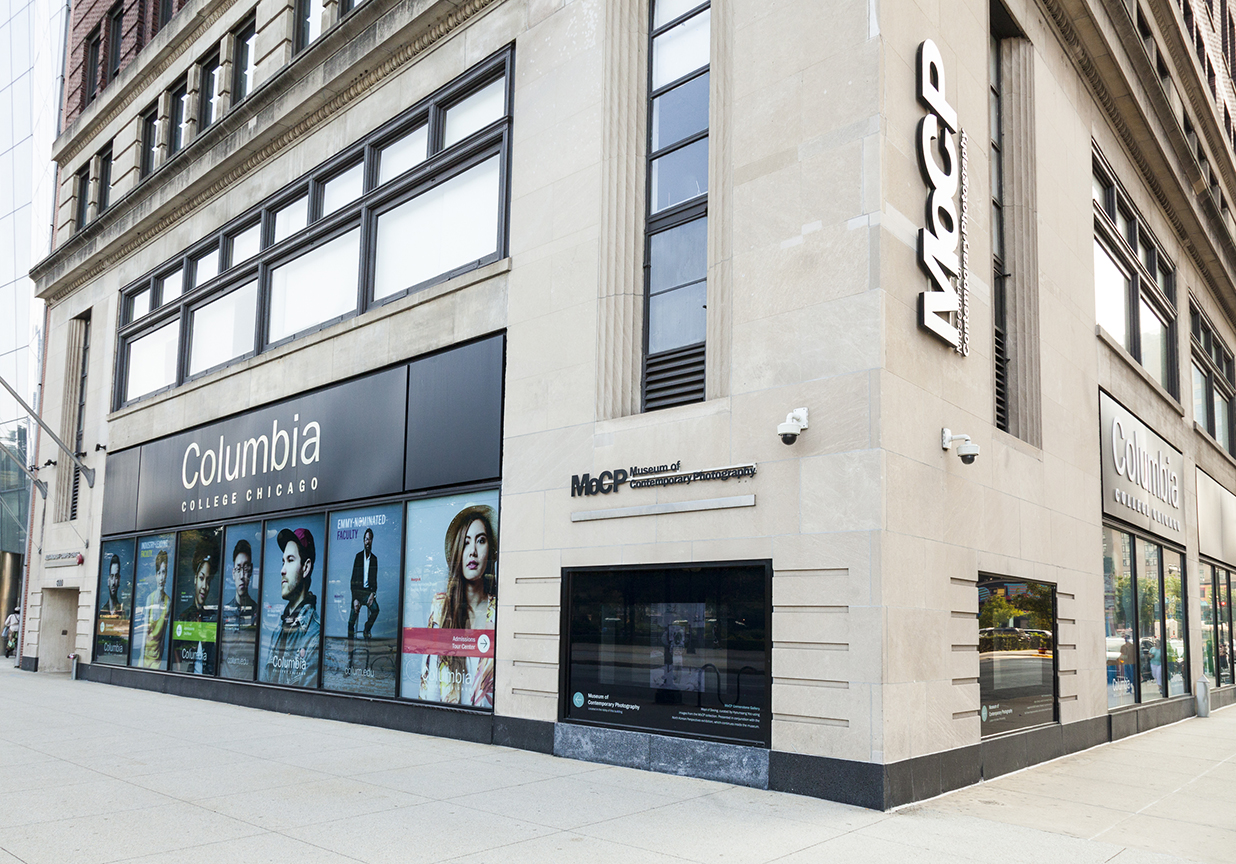 (CHICAGO) April 13, 2018—Two Columbia College Chicago exhibition spaces, the Glass Curtain Gallery and the Museum of Contemporary Photography (MoCP), received nearly $60,000 in total grants from the Terra Foundation for American Art for Art Design Chicago projects. Art Design Chicago, an initiative of the Terra Foundation with presenting partner The Richard H. Driehaus Foundation, features exhibitions at institutions across Chicago and in other cities, academic and public programs, and scholarly publications that explore the ongoing cultural influence of Chicago’s art and design history.

Where the Future Came From, a research project curated by Meg Duguid, director of exhibitions for Columbia’s Department of Exhibitions, Performance, and Student Spaces (DEPS), focuses on the role of feminist artist-run activities from the late 19th century to the present. The project will kick off with a two-day public symposium featuring a keynote discussion on feminist economics and its relationship to women in artist-run institution.

“The history of artist-run activities, especially ones led by women, are ephemeral and vulnerable to erasure, making it critical to reach beyond what is in the archives,” said Duguid. “The intent is to create an egalitarian process that employs artists, viewers, and art historians to help contribute toward the ongoing creation of the history. With that in mind, we are seeking information from the public about projects that took place through women-led collectives, in feminist artist-run galleries, and in alternative arenas such as dinner tables, basements, on the street, and printed publications.”

The exhibition will consist of hand-painted timeline of intersectional feminist artist-run projects and a participatory research space. Scholars-in-residence, students, artists, historians, and the public will work with the curator to continue developing and adding to material in the exhibition. The project will conclude with a publication outlining new histories that have come to light.

“We are honored to join Terra Foundation’s groundbreaking Art Design Chicago initiative, especially in this second grant phase which supports adventurous research, greater public access to academic collaborations, and the time and support to work across geographic barriers,” said Neysa Page-Lieberman, executive director, DEPS. “These projects are self-propelled programs that have been the lifeblood of Chicago’s contemporary art scene.”

“Say It with Pictures” Then and Now: Chicago’s African American Photographers 1890-1930 is a multi-tiered academic project led by Amy Mooney, associate professor of Art and Art History at Columbia. Mooney will highlight the under-recognized work and impact of African-American commercial photographers, and the 65 photographic studios they owned and operated in Chicago, from the late 19th and early 20th centuries. Presented in collaboration with the Black Metropolis Research Consortium and the Chicago Public Library Vivian G. Harsh Research Collection of Afro-American History and Literature, the project draws its title from a 1933 publication that encouraged its readers to “say it with pictures” through photographs of African-American achievement in the arts, business, community building, and technology.

“Despite their significant productivity in both personal portraits and photographic journalism, the contributions of black photographers from this era have disappeared from our contemporary consciousness,” said Mooney. “Recovering their forgotten contributions will allow us to contextualize their work within Chicago’s black media history, and call attention to their long-overlooked cultural and economic achievements. The photographs reflect the aspirations of the Great Migration and the myriad ways that photographers and their patrons countered the subjugation of black lives.”

The project will kick off with a public conversation between Mooney and celebrated artist and photography historian Deborah Willis. With the Black Metropolis Research Consortium, Mooney will conduct a scholarly workshop, after which the public will have the opportunity to share photographs and other source material at two crowd-sourcing sessions. The project will culminate into an interactive digital exhibition and publication hosted on the MoCP’s website that will impact the history of photography.

“The MoCP is proud to host Associate Professor Amy Mooney’s timely initiative, which will bring to the forefront an understudied group of black photographers who have not been sufficiently represented for their role in photo history,” said Natasha Egan, executive director, MoCP. “This initiative will not only engage the Chicago community in art historical scholarship, but will also have a resounding impact on our understanding of that period of local and photographic history.”

Art Design Chicago is a spirited celebration of the unique and vital role Chicago plays as America’s crossroads of creativity and commerce. Spearheaded by the Terra Foundation for American Art, this citywide partnership of more than 60 cultural organizations explores Chicago’s art and design legacy and continued impact with more than 30 exhibitions, hundreds of events, as well as the creation of several scholarly publications and a four-part public-television series presented throughout 2018. Support for Art Design Chicago is provided by the Terra Foundation for American Art and Presenting Partner The Richard H. Driehaus Foundation. Additional funding for the initiative is provided by Leslie Hindman Auctioneers, the John D. and Catherine T. MacArthur Foundation, and the Joyce Foundation. The Chicago Community Trust, Leo Burnett, Polk Bros. Foundation, and EXPO CHICAGO are providing in-kind support. www.ArtDesignChicago.org #ArtDesignChicago

About Terra Foundation for American Art

Since it was established in 1978, the Terra Foundation for American Art has been one of the leading foundations focused on the historical art of the United States. Headquartered in Chicago, it is committed to fostering exploration, understanding, and enjoyment of American art among national and international audiences. To further cross-cultural dialogue on American art, the foundation supports and collaborates on innovative exhibitions, research, and educational programs. Implicit in such activities is the belief that art has the potential both to distinguish cultures and to unite them. The foundation also provides opportunities for interaction and study through the presentation and ongoing development of its own art collection in Chicago, recognizing the importance of experiencing original works of art. www.TerraAmericanArt.org