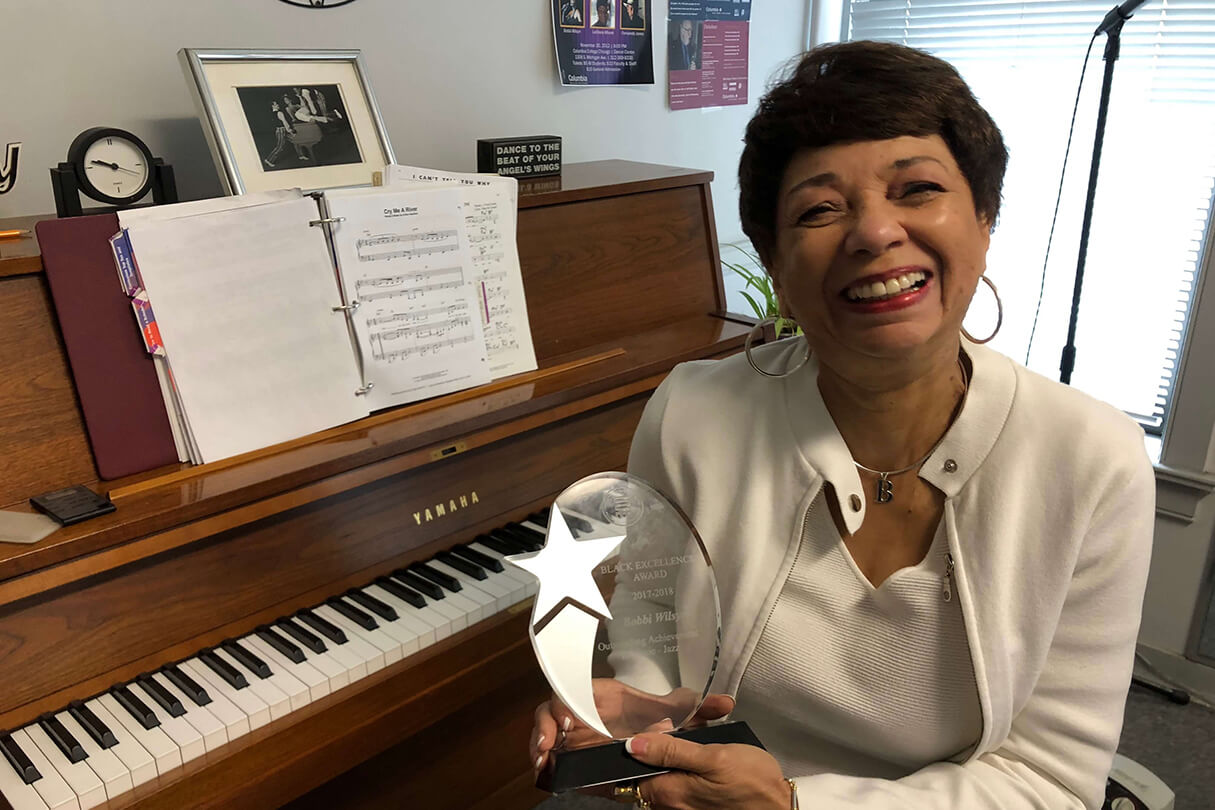 Photo courtesy of Bobbi Wilsyn.
Wilsyn is recognized for her contributions to and accomplishments in Jazz music spanning decades.

“It was an honor to have been nominated for the 18th annual African American Arts Alliance Black Excellence Award in Jazz, but to have been the recipient is amazing,” said Wilsyn. “I was also pleased to see many of our voice students, past and present, including Izaiah Harris (Musical Theatre major) who received the award in the category for Best Actor.”

Wilsyn is an international performing artist who has been an integral member of Columbia for nearly four decades, serving in different capacities including as adjunct instructor, senior lecturer, professor of instruction, and coordinator of the Voice and Choral Ensemble. She teaches a range of techniques in contemporary singing and vocal improvisation, as well as Pop, R&B, Jazz, Blues, and Gospel.

“Bobbi Wilsyn is one of Chicago's most accomplished jazz singers. Her voice is phenomenal, her presence on stage is breathtaking, and I can think of no other jazz singer that comes close to matching her style and charisma,” said Jackie Taylor, president of the African American Arts Alliance’s board. “She is one of a kind and this Black Excellence Award is long overdue.”

Interim Dean of the School of Fine and Performing Arts Rosita M. Sands credits Wilsyn for her significant  contributions to the Music Department’s curriculum and distinctive focus on the performance of contemporary, urban, and popular music.

“Bobbi is not only an extraordinary musician, but an incredible teacher and mentor to our students,” said Sands. “She models what it takes to sustain a long, active performance career, one filled with consistently high-caliber performances. We are all tremendously proud of Bobbi for receiving this well-deserved honor!”

Wilsyn founded the all-female Jazz combo, SHE, featuring some top women Jazz instrumentalists and performs with Chicago's Eleven Jazz Divas. As a masterclass facilitator, Wilsyn has presented workshops for the Jazz Institute's Straight-Ahead Jazz Camp and internationally in Santa Arissi, Sardenia, Conservatorio di Bari, and the Conservatorio di Pescara. She was featured with the Chicago Jazz Ensemble and has presented with Orbert Davis’ Chicago Jazz Philharmonic for the performances of “Through Ella's Eyes.” Wilsyn’s album It’s About Time features some of her own compositions and her one-woman shows are tributes to famous ladies of jazz as well as musical theater cabaret. More about Bobbi Wilsyn is available here.