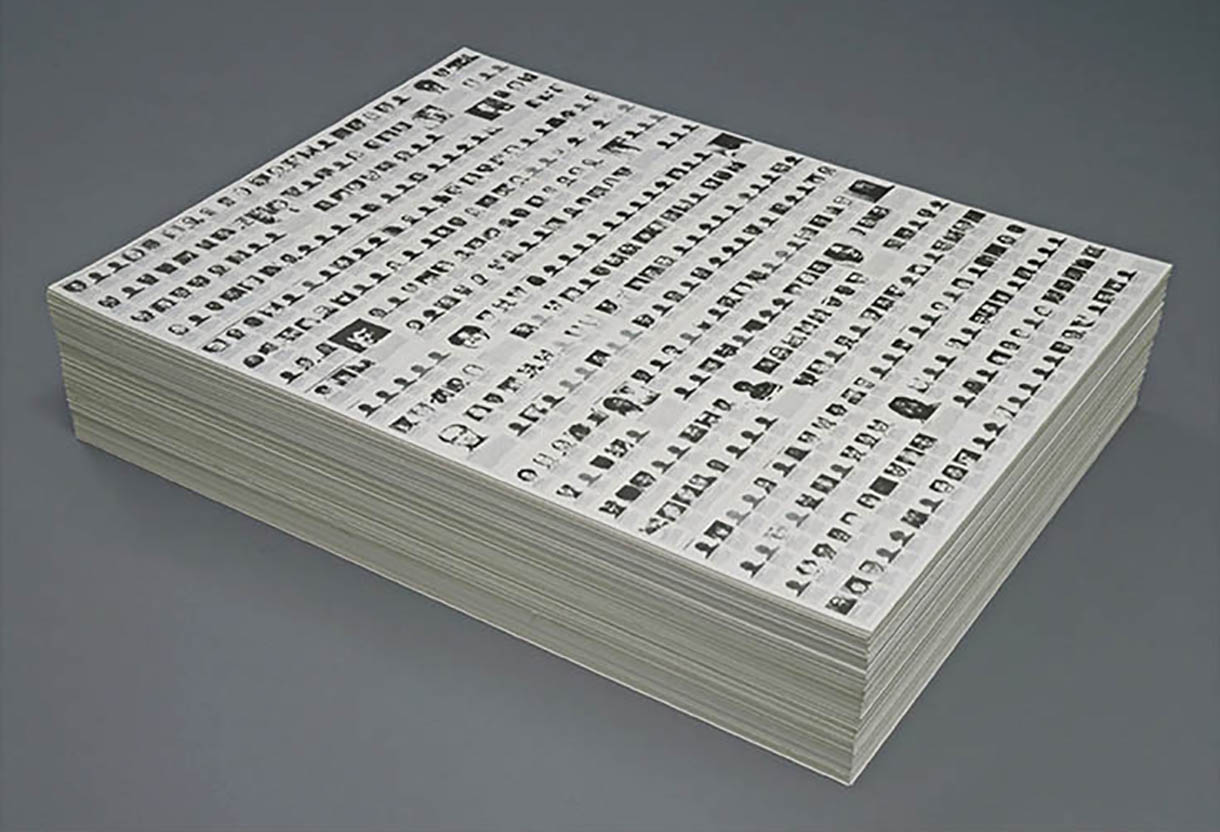 Felix Gonzalez-Torres, Untitled (Death by Gun), 1990
Opening this Fall at the Museum of Contemporary Photography

The Museum of Contemporary Photography at Columbia College Chicago (MoCP) presents American Epidemic: Guns in the United States from September 10, 2021 – February 20, 2022. This exhibition brings together work by nine artists who examine gun culture in the United States and the role guns play in structural violence, poverty, systemic racism, and an increasingly militarized police force. The exhibition is organized by Karen Irvine, MoCP Chief Curator and Deputy Director.

The exhibition features work by Carolyn Drake, Nancy Floyd, Stephen Foster, Andres Gonzalez, Félix González-Torres, Zora J Murff, Renée Stout, and Hank Willis Thomas and Kambui Olujimi. The work presented in American Epidemic not only explores the complex array of issues that arise with the increased presence of guns in American society, but advocates for an intersectional understanding of how gender, race, capitalism, and militarism affect the larger conversation around gun control in this country.

The artists featured approach the topic from a wide range of perspectives and span the last thirty years of American conversations on gun violence. Félix González-Torres’s seminal work Untitled (Death by Gun) (1990), explores the impact of loss through a stack of papers on the floor that each list the names and photographs of 464 individuals killed by guns in the United States during the week of May 1–7, 1989. As visitors are encouraged to read the sheets and take them with them, González-Torres is able to memorialize people affected by gun violence and continue to share their memory, even thirty years later. Carolyn Drake also seeks to commemorate lives lost—in her piece, those who were killed by police violence (1,004 in the US in 2019) are represented through 3-inch squares of fabric cut from police uniforms woven into a quilt.

Other artists in the exhibition explicitly examine how Black lives are affected by gun violence. Zora J Murff uses North Omaha, Nebraska as a case study to reflect on forms of violence committed by citizens and police officers against the Black body, revealing the myriad ways in which racist policies continue to harm Black communities. Stephen Foster’s video Libation (2019) reenacts a grieving ritual in some Black communities colloquially referred to as “pouring one out,” performed to honor the passing of a community member, emphasizing personhood, mourning, and empathy.

Artists Renée Stout, as well as Hank Willis Thomas and Kambui Olujimi, direct their gaze at how American society normalizes guns at a young age, using dolls and toys to create sculpture, images and video that reflect how children explore conflict through playing games of violence starting in their youth. Also concerned with issues of gun ownership and socialization is Nancy Floyd, who explores the gendering of guns, portraying the breadth of women gun owners, from governmental agents to recreational target range shooters.

Andres Gonzalez’s series American Origami (2019) examines a most quintessentially American tragedy: mass shootings in schools. Gonzalez returned to the sites of seven different shootings to create elaborate case studies of each school consisting of interviews, forensic photos, archival objects, press documents, and photographs made during his visits. These images, which are both poetic and raw, capture the horror of loss. In addition to exhibiting these photographs in the exhibition, the MoCP will also be collaborating on two performances with Gonzalez, Columbia College Chicago’s Theater Department, and #HereToo, a theater initiative that amplifies young gun control activists’ voices through performance; the performances will premiere October 13-23, 2021.

Using the photographic medium, these artists provide a nuanced exploration of the way in which guns are yielded in this country, including the politicization of trauma, public mourning, and the rote political refrain of “thoughts and prayers” in response to acts of gun violence.

“We hope this exhibition lays bare the persistent epidemic of gun violence in this country,” said Karen Irvine, MoCP Chief Curator and Deputy Director. “These artists point us towards nuanced ways of reckoning with this tragic—and uniquely American-—plight.”

Reservations are strongly encouraged. Visitors can make a reservation at mocp.org.

About the MoCP
The Museum of Contemporary Photography at Columbia College Chicago is the world’s premier college art museum dedicated to photography.  As an international hub, the MoCP generates ideas and provokes dialogue among students, artists and diverse communities through groundbreaking exhibitions and programming.

MoCP Sponsors
The MoCP is a nonprofit, tax-exempt organization accredited by the American Alliance of Museums. The MoCP is supported by Columbia College Chicago, the MoCP Advisory Board, the Museum Council, individuals, and private and corporate foundations.

American Epidemic: Guns in the United States has been generously supported through the National Endowment for the Arts.