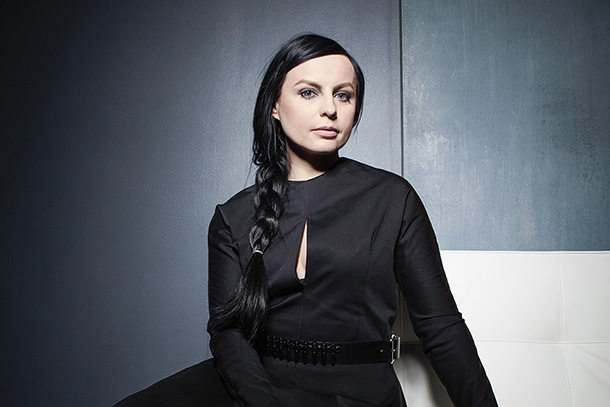 “My life is about an unexpected journey, not a destination.”

“Having a creative lifestyle has always been a part of me,” says fashion designer Agnes Hamerlik. “The passion of creating something beautiful drives me every day.” Born and raised in Poland, Hamerlik earned a bachelor’s degree in Polish language and literature and a master’s in Polish philosophy in the early 2000s and traveled Europe for nearly a year. “I had my ‘a-ha’ moment in Paris when I was able to go to the couture shops and experience high end women’s fashion,” she says. “Coming from what was a communist country, I was never privy to these types of luxuries growing up. This was how everything started. Looking at beautiful, handmade garments … opened my eyes for what I could really create.”

Hamerlik moved to Chicago in 2004, and by 2008 she was enrolled at Columbia College Chicago.

Studying fashion was “a fantastic journey of self-discovery through art,” she says. Her designs often include exaggerated shapes, intricate embellishments, couture beading and embroidery, or unusual materials like neoprene.

One of her recent collections is inspired by the artist Frida Kahlo, whose iconoclastic personal style was an eclectic, lavish spin on Mexican indigenous costume and a complement to her intensely personal Surrealist paintings. Hamerlik’s contemporary take on Kahlo’s look tempers femininity with toughness: richly embroidered black dresses are accessorized with not only Kahlo-esque braids, but slick driving gloves and ammunition belts.

“I believe there is a place for everyone in the fashion industry,” Hamerlik says. “The problem is finding your niche.” She found hers at Columbia, where her undergraduate career culminated in her designs being chosen for the Hokin Honors exhibition in 2011 and Fashion Columbia in 2012. In 2012, she was selected to represent Columbia in the Driehaus Design Initiative Fashion Show, and she was the winning designer for the Launch 2012 Driving Fashion Forward: Autohaus on Edens Fashion Show, as well as the Stanley Paul-Raelene Mittleman Scholarship competition for excellence in design.

Her fashions have appeared in editorials for numerous publications, including Schön!, La Botanica, Assure, Alive, and The Huff Post.

Additionally, Hamerlik was selected to be a designer in residence with the Chicago Fashion Incubator at Macy’s on State Street. But she isn’t resting on her laurels. She is “designing and creating every day.”

“I understand the value of hard work and perfecting my craft,” Hamerlik says. “My life is about an unexpected journey, not a destination.”