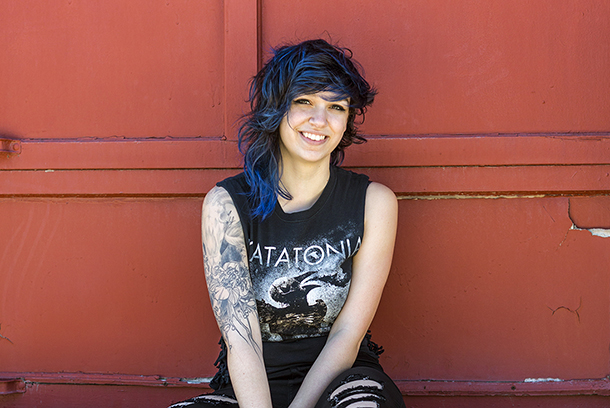 “The best way to market yourself is by saying, ‘I’m interested in learning more things.’”

“When I was growing up, I didn’t know any women in any of these fields,” says Ali Cedroni ’16, a junior sound designer for Chicago-based interactive media company Jellyvision. “But for some reason it just didn’t stop me.”

By day, Cedroni edits voice-overs for Jellyvision’s flagship product, Alex, a virtual communication platform that helps companies communicate human resources information like health insurance and financial options. By night, she’s a freelance sound professional for video games, music, and film. She just wrapped editing voice-overs for Trinket Studios’ Battle Chef Brigade by Adult Swim Games. Now she’s creating sound effects for the indie game Codemancer. “It focuses on teaching kids the concepts of coding without dealing with syntax and things like that. It gets them in a problem-solving mind space before they actually learn a language in code,” she says.

Cedroni’s path began in the Audio Arts and Acoustics Department at Columbia College Chicago, where she discovered the power of being proactive. “Columbia is what you make of it,” says Cedroni. In her mixing classes, she was the one setting mics and using the console. “You don’t get a feeling for working with a client unless you’re up in the front, figuring out what to do and making decisions. I get that it’s terrifying … but [college] is the time to make mistakes. The more ‘up in front’ you can get, the better.”

It wasn’t always easy, especially when she was one of the only women in the room. But Cedroni is optimistic about how to change that. “It starts with having more representation. The more women we have in the space, the less likely someone will be the token girl in an office,” she says. “And the easier it will be for younger generations. They won’t have dudes calling them ‘hon’ in the control room and things like that. I’ve had plenty of those,” she says.

Cedroni interned at two music studios before being hired directly out of college by Jellyvision. “I love that my coworkers come from different creative backgrounds,” she says. “We all understand the struggles that each of us go through. It’s easier to get along with artists when you know how art works. A lot of our technical people have sound degrees, so they know what I’m going through, and vice versa.”

Cedroni serves on the board of the local chapter of International Game Developers Association, which promotes Chicago’s status as a growing tech hub. She urges students and recent grads to network by getting involved in the game development community. “I know college is exhausting, but it never stops being exhausting,” says Cedroni. It’s also important to keep learning: “Right now I’m working on getting my coding back up to par, because it’s been a few years since I’ve used it,” she says. “Audio programming, even as a sound designer, is still good to know—what goes on under the hood, how to fix problems. The best way to market yourself is by saying, ‘I’m interested in learning more things.’"