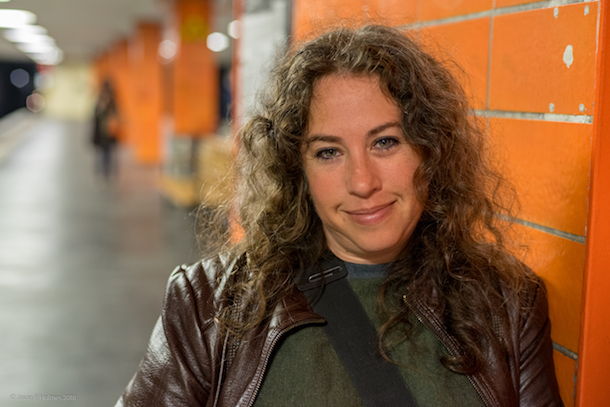 “When the opportunity to shape the Studs Terkel radio archive was brought to WFMT, I came in for a 15-minute meeting that lasted an hour.”

“People are hungry for stories. It’s part of our very being. Storytelling is a form of history, of immortality too. It goes from one generation to another.”—Studs Terkel

“The conversations [that] Studs has had over the course of 45 years are incredibly relevant to this day,” says Allison Schein ’08, archivist at WFMT’s Studs Terkel Radio Archives (STRA). The STRA preserves the work of one of Chicago’s most celebrated storytellers. For almost 50 years, the Pulitzer Prize-winning author, actor, and activist Studs Terkel was a staple on WFMT radio, hosting guests in conversation about anything that interested him—social reform, travel, anthropology, poetry, feminism.

Schein has been working at the archives since November 2013—more than four years before the site went live. Eventually, STRA will digitally house most of Terkel’s radio programs from 1952 to 1997. Already, the site houses more than 1,200 programs—and that number keeps growing.

During his life, Terkel was lauded for his oral histories of everyday Americans. Website visitors can tap into hours and hours of Chicago history and browse the collection by topics, people, dates, and keywords. “There are some really great programs that we will be able to share on music theory and arts, and literary and theatrical criticism that [help] demonstrate and give notion to Chicago’s performing arts history and commentary unlike anyone else can,” says Schein. “I’m always uncovering new and exciting and very relevant information and programs. We’re still having surprises, and we’re still able to make new conversations available to the public.”

Schein grew up listening to musicians on Chicago’s Wax Trax! record label. Her love of music and radio led her to Columbia College Chicago to study audio design and production. In 2011, Columbia Audio Arts and Acoustics associate professor Ben Sutherland encouraged her to pursue archiving, so she went back to school to earn a master’s degree in Library and Information Science with a focus on archiving. At STRA, Schein realized that her experience working with recorded music lent itself to working with recorded conversation.

“As someone who is grounded in audio and how people hear things, the one thing I’ve learned from Studs [and] my coursework at Columbia [is that radio is about] having feeling come across,” says Schein. “It was just two voices, and the power of those two voices, [that] reaffirmed my love of audio. It wasn’t music, [but] it was still emotional and poignant and intentional on its own, even when it was just two people speaking into the microphone.”