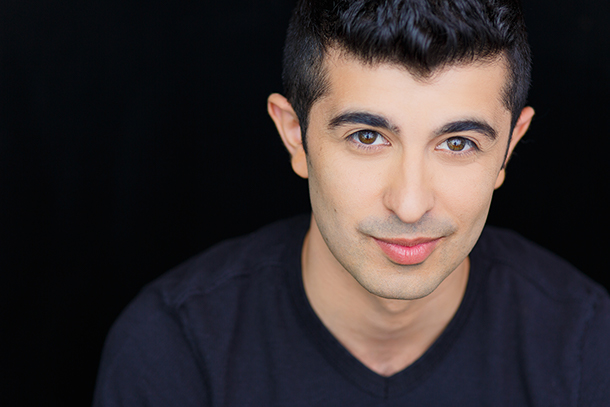 “I feel honored and lucky to have been trained on the Chicago theater stages.”

You might recognize Behzad Dabu ’08 from ABC’s How To Get Away With Murder and Showtime’s The Chi. Before he began acting on television, he cut his teeth on Chicago stages. As a Theatre alum of Columbia College Chicago, Dabu got his start in the Chicago theatre scene, performing at Steppenwolf Theater Company, Goodman Theatre, Victory Gardens Theatre, and TimeLine Theatre Company (of which he is a company member), among others. Now, the Los Angeles-based actor splits his time between acting on-camera and onstage. Dabu talked to us about the jump from stage to screen.

Could you discuss the difference between acting in Chicago and Los Angeles?

Chicago’s all stage and Los Angeles is all on camera. And so the differences are real—the mediums. I consider myself a Chicago actor on Chicago stages. [Dabu originated the roles of Abe in Disgraced and Amit in Samsara in the world premieres of both shows.] I feel honored and lucky to have been trained on the Chicago theater stages.

How do you prepare for roles?

There’s a lot of different methods that I typically use. If it’s a stage role that’s going to be very physical, I start from the outside in: with my body, my walk. How does this character carry himself? How does this character move? How physical is this character? I let the movement influence emotions, voice, connectivity, and how [the characters] take up space. On camera, a lot is from the shoulders up, so I think about eyes and face a lot.

What do you like most about working on stage?

The audience can look at anything on the stage: another character, you, the set, whatever. On camera, a director and editor are choosing what you look at and what you don’t see. The magic is constantly alive on stage because one person out of an audience of a thousand might be looking at you, so you’ve got to be alive and tell a story.

What do you like most about working on screen?

In a weird way, it’s almost more collaborative because there are editors, sound designers, production and art coordinators, art directors, and more. It’s such a collaborative process to get it from page to your television set. What I also really like about it is that you can try things a hundred different ways and see what happens. It’s just fast and quick—and obviously the access to reach millions of people instead of just a thousand at a time.