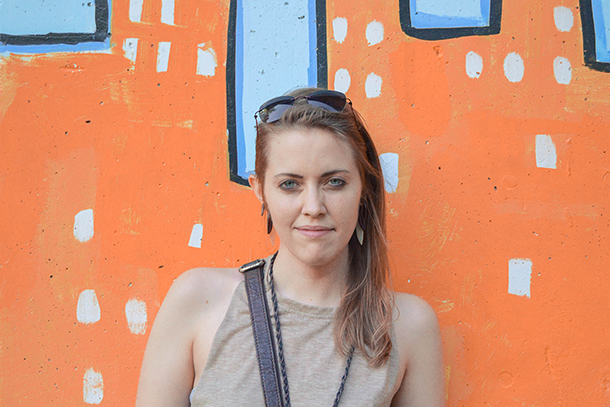 “I knew I wanted to switch to a college that really did have a video game career path for me, so I went to Columbia.”

User experience/user interface (UX/UI) designer Blair Kuhlman has a passion for games with an independent spirit.

Blair Kuhlman ’13 can tell when a video game is destined to be a hit. “If I don’t hear immense amounts of laughter and yelling coming from the play-test room, that means that we’re doing something wrong,” she says. “The more rambunctious people get, especially when the game is in its early stages and not necessarily the prettiest thing to look at, but the gameplay is still shining through, then you’re definitely on the right track.”

Kuhlman, who works as a user experience/user interface (UX/UI) designer for Hi-Rez Studios in Alpharetta, Georgia, has a passion for games with an independent spirit. “I’ve always been an artist at heart,” she says. She started college at the School of the Art Institute of Chicago, where she took a “really weird VR class that taught me about programming and a little bit about game design.” She “fell in love with that immediately,” she says. “I knew I wanted to switch to a college that really did have a video game career path for me, so I went to Columbia [College Chicago].”

At Hi-Rez, Kuhlman helps create the layout and flow for games like Smite and its offshoot, Hand of the Gods. As she explains, “User interface is pretty much anything you see when you’re playing a game: menus, all the stuff that you go through before you drill into the game, like the front-end stuff. It’s pretty much everything that’s not the game play. User Experience is a little different—it’s from a psychology aspect, dealing with how we present information so it’s easy to understand.”

Kuhlman notes that the four-year-old Smite is “ancient” in terms of gaming, so the company releases fresh, engaging limited-time modes of gameplay called “adventures.” Sometimes they’ll deviate drastically from the game’s style. “We had one adventure that turned the game into something like Mario Kart, a completely different genre. Working on stuff like that is really fun because it’s giving me different challenges and new genres to tackle that I haven’t tackled before. It’s a wild ride.”

The ride isn’t without bumps, including gender discrimination. “It’s kind of inevitable that you’re going to find somebody who is casting doubt on whether you should be in the space. This is sad, but I’ve gotten so used to it that it doesn’t even bother me anymore. I mean, I’ve kind of learned to let that stuff slide off of you and keep going,” she says.

From her perspective, the future of gaming looks bright. “I am very optimistic,” she says. “Some games have proven that shooting for more than one demographic is really profitable. Overwatch is a really good example of that. Each one of the characters is unique, and they’re not representing stereotypes. That goes a long way.” She is also enthusiastic about the democratization of technology. “A lot of the tools to make games are now free, so anyone can pretty much pick it up. We’re going to start to hear a lot more voices in the industry.”