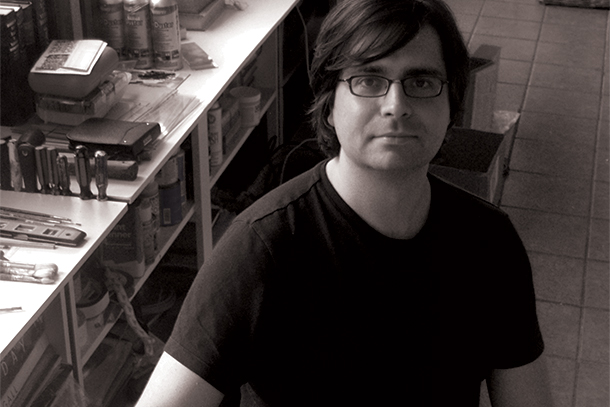 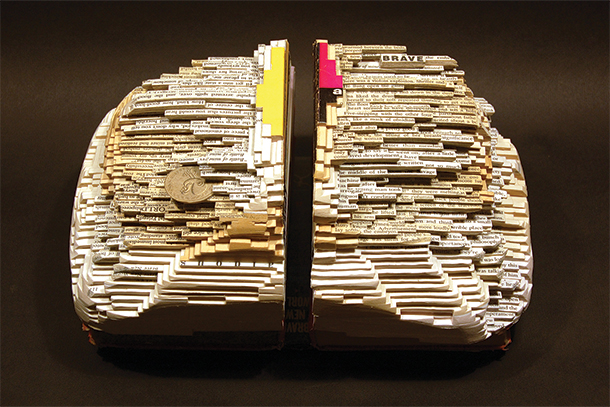 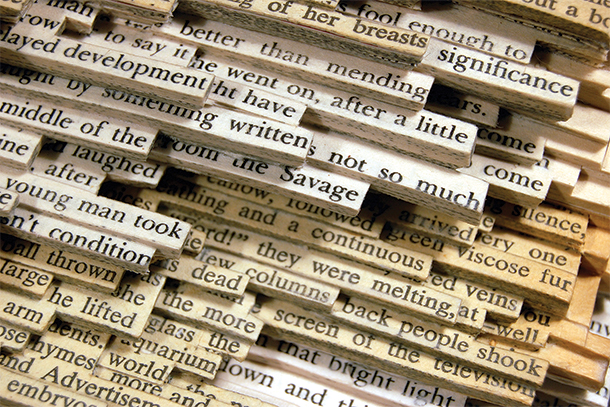 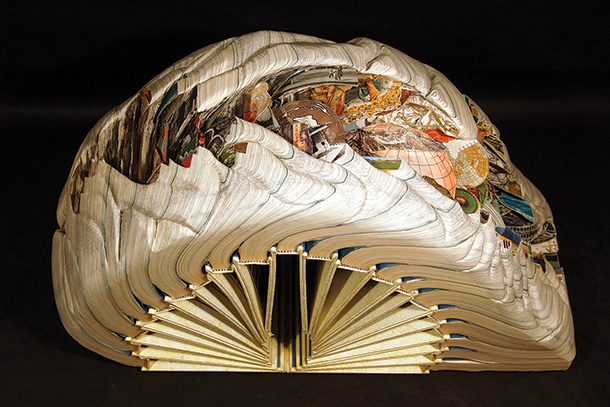 “I want people to look at my work and think about what role books played and what their future may be.”

Since appearing in the pages of DEMO 15, multimedia artist Brian Dettmer ’97 moved his studio from Atlanta to Brooklyn, staged a 10-year retrospective of his work at an Italian gallery, and continued carving the intricate book sculptures that made his name in the art world.

The Naperville native began by cutting words and images out of books to affix to his canvases. Soon, he was using books instead of canvases, burrowing holes through the covers and into the pages. One day, while carving a book, Dettmer had an artistic epiphany.

“I came across [the image of] a landscape that I began carving around. Then a figure emerged and I began to carve around that,” Dettmer says. “That was my ‘eureka’ moment. It was exciting because I didn’t know what would come next.” What would come next was a body of work that is capturing the imaginations of the art world.

Carving Out a Career

Using clamps, rope and weights to hold a book in place, Dettmer applies a clear sealing varnish to the outside. He then carves through the cover and pages one at a time, with X-ACTO knives, tweezers and other tools. Dettmer doesn't memorize books before working with them, which makes his process an act of discovery every time.

"There's a high level of chance because I don't know what's coming on the next page," he says. "It's really a collaboration between me and the book."

Dettmer works on several projects at a time, logging up to 60 hours per week in his studio. “Pieces can take anywhere from a week to several months to complete,” he says.

Between the Paper Pages

With the rise of the Internet making old-school reference books obsolete, Dettmer uses recycled encyclopedias and dictionaries to consider the evolution of information.

“I want people to look at my work and think about what role books played and what their future may be,” he says. “I’m also playing with ideas of our information becoming completely intangible as everything goes digital. I’m trying to suggest the threat of loss as formats constantly shift.”

Sometimes people ask how Dettmer continues to find inspiration after more than a decade of book work. He's not sweating it. "I think that with books, the context and potential is sort of endless," he says. "It's probably the most relevant material to think about, professionally and physcially, at this point in history."

Adapted from DEMO magazine, issues 15 and 23