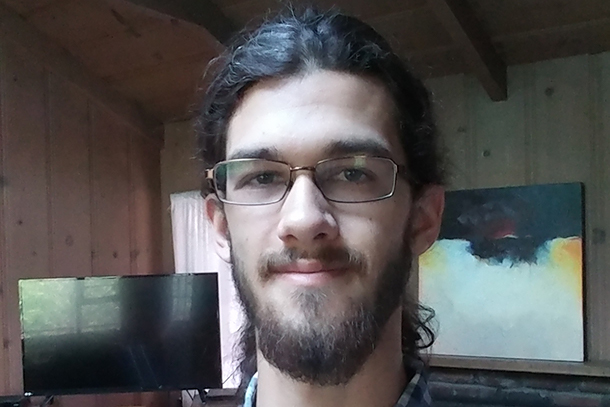 Howard sums up his job this way: “Making space and sound right.”

As an acoustics and vibration consultant, Acoustics alum Carter Howard figures out which spaces create the best sounds.

When Carter Howard ’17 tells people he works in acoustics consulting, many ask, “How long have you been playing guitar?” He explains that acoustic consulting has nothing to do with creating music. He sums up his job this way: “Making space and sound right.”

Howard works as an acoustic and vibration consultant at The Papadimos Group in San Francisco. In this role, he uses noise-level standards and partners with architects to make the sound of a space best serve its function—which can mean everything from examining the acoustics of a concert hall to working through noise complaints in an apartment complex.

Howard spends his days analyzing raw data collected from sound level meters during onsite surveys. Some days, he completes on-site surveys himself, collecting the data he and his team will use. On others, he creates digital color maps of sound data or enters all of their raw data into spreadsheets to help track the ways spaces sound—and how to make them sound better.

For example, when General Electric installs MRI machines in hospitals, vibrations and machine noise can’t disturb other spaces, physicians, or patients. “We analyze specs and work with architects to plan locations of walls and choose flooring that help meet the noise standards,” says Howard. The collaboration can occur any time, but Howard adds most work begins after a project is built—when noise complaints become an issue to patients, customers, or employees. “No one really thinks about acoustics until it’s a problem,” he says.

Audio production and acoustics are still often misunderstood. According to Howard, audio production creates sound, while acoustics analyzes sound. Howard actually began his time at Columbia College Chicago as an Audio Design and Production major before his advisor suggested majoring in Acoustics. He still dabbled in audio as an AV technician/live sound engineer in Columbia’s Department of Exhibition and Performance Spaces.

Another perk of living in Chicago: all of the live music—a chance to jam out while appreciating the acoustics of a space. So where’s the best place in the city for the pure acoustics of a show? Howard’s expert vote goes to the Pritzker Pavilion in Millennium Park.