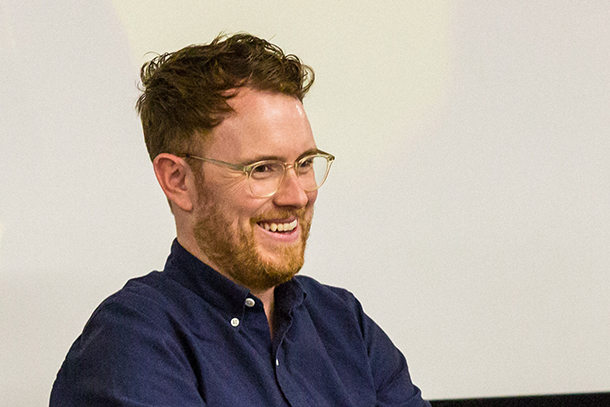 Christian Sprenger's considerable skills have already earned him an Emmy and two nominations.

If you’ve watched Atlanta, GLOW, Baskets, or Last Man on Earth, then you’ve seen the work of Christian Sprenger ’07. As cinematographer for a host of visually stunning and quirky television shows, Sprenger is gaining increased recognition for his cinematic style.

The year 2018 might be Sprenger’s best year yet. He was nominated for two Emmys for his work on Atlanta and GLOW, both in Outstanding Cinematography for a Single-Camera Series (Half-Hour). Despite fears that this rare double nomination might split his voters, Sprenger won the Emmy for his work on the “Teddy Perkins” episode of Atlanta.

Just weeks after his Emmy win, Sprenger visited campus for two days with his longtime creative partner and gaffer, Cody Jacobs ’08, to offer a lighting workshop, answer questions from students, and screen his Emmy-winning episode.

Of his time at Columbia College Chicago, Sprenger says opportunities like Practicum, where students from different cinema concentrations collaborate to make a film, were instrumental to his growth as a filmmaker. “Practicum was amazing,” Sprenger told the student audience. “It’s where I first experienced start to finish how to properly make a film.”