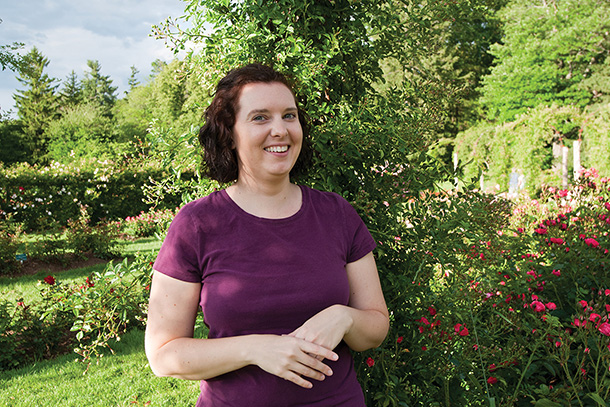 “I thought ASL was a language on its own. But Deaf culture has its own history, shared experiences and traditions.”

The power of actor and ASL interpreter Christina Stevens is in her hands. The ASL-English Interpretation grad travels the country entertaining deaf and hearing students alike.

When Christina Stevens takes the stage in an elementary school, she does more than delight young audiences with depictions of fables and fairytales. As the actress delivers her lines in English, her hands speak an entirely different language: American Sign Language (ASL). Yet her role doesn’t stop there; she pulls double-duty interpreting the lines of her two deaf cast mates, who perform solely in ASL. The simultaneous use of sign language and English lets Stevens and the rest of the Little Theatre of the Deaf entertain both hearing and deaf children at the same time. At every moment during the play, kids hear and see the production in two languages.

Stevens’ fascination with ASL interpreting came from watching the fluid motions and expressive faces of interpreters at the Chicago Shakespeare Theatre. A 2002 theatre studies graduate from DePaul University, Stevens was ready to earn a second degree. After a local interpreter recommended Columbia College Chicago, she enrolled in the program at the age of 27.

The Midland, Mich., native immersed herself in ASL. Because her professors were deaf, she couldn’t revert to English in a bind. So she picked up ASL quickly, especially by making mistakes. Stevens accidentally signed completely inappropriate things—translations unsuitable for publication—but mistakes were part of the learning process, she says.

During the first two years of Columbia’s ASL program, students learn the language itself. In the latter two years, they learn how to interpret, taking what a deaf person signs and translating that into spoken English (and vice versa). But the program also explored Deaf culture—something Stevens didn’t know existed.

“I thought ASL was a language on its own,” Stevens says. “But Deaf culture has its own history, shared experiences and traditions.”

Columbia’s ASL program requires students to attend Deaf events around Chicago, which led to Stevens’ discovery of the Little Theatre, the children’s branch of the National Theatre of the Deaf (NTD). Established in 1967, the Tony Award-winning NTD has performed in every state and on all seven continents. Now based in West Hartford, Conn., Stevens tours the nation’s schools with the Little Theatre.

Ultimately, exposing students to ASL makes NTD the most rewarding experience of her career, Stevens says. Besides freelance interpreting for students in spoken English classes, Stevens continues to stay focused on the Little Theatre’s performances. No matter where she goes, her nimble fingers will do the talking.