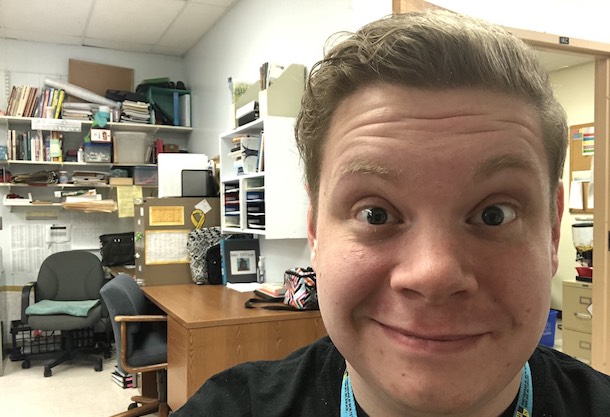 “Being around all of our Deaf staff at Columbia and our tutors [helped me] to catch on very quickly because I was using the language daily.”

Growing up, ASL-English interpreter Dan Englund ’15 assumed that sign languages and spoken languages share the same grammar. At Columbia College Chicago, he learned that American Sign Language (ASL) is a different language entirely. It’s not “English word order on the hands,” he says. In time, he would learn that ASL not only follows different grammatical rules, it has its own sayings and community.

One of the challenges Englund faced as a student was learning how to interpret idiomatic phrases, common sayings perfectly natural in one language but meaningless or absurd in others. In English, “My refrigerator is running well” makes complete sense. In ASL, it suggests a fleet-footed kitchen appliance embarking on a journey of indepencence. Interpreting idiomatic phrases became easier as Englund interacted with the Deaf community. “Being around all of our Deaf staff at Columbia and our tutors [helped me] to catch on very quickly because I was using the language daily,” he says.

Englund now works as a full-time interpreter at Hindsdale South High School, which serves as “a cluster site for [approximately 40] Deaf and hard-of-hearing students ... [who] are bused in from all over the Chicagoland area,” he says. He usually interprets for one to two students at a time, and rarely works with the same students from class to class. At schools with fewer Deaf students, an interpreter often works with the same child every day. Englund did just that at a middle school shortly after graduating. “That [was] wonderful, but I love the opportunity [at my current job] to work with so many different Deaf and hard-of-hearing students,” he says.

From the start of his ASL education, Englund learned that his role was as much about supporting the Deaf community as interpreting the language. Before interpeting became an established, regulated profession, it was easy for opportunistic interpreters to exploit the Deaf, and many strictly saw them as a means to make money. Columbia’s ASL-English Interpretation program, one of the first in the country, has educated generations of interpreters who appreciate the language community they work for. As Englund says, “The only reason [interpreters] have these jobs is because of the amazing Deaf community that we have the privilege of interacting with on a daily basis.”