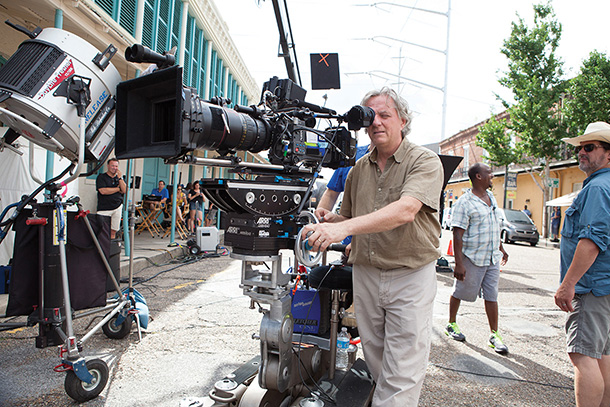 “It’s always the script that makes the vibe. Even if you don’t get along with the director, the actors, or anybody, you can still get through a movie because you’re still friends with the story. ”

Cinematographer Declan Quinn ’79 has won three Independent Spirit Awards (for Leaving Las Vegas, Kama Sutra: A Tale of Love, and In America) and an MTV video award (for Smashing Pumpkins’ “Tonight, Tonight”). The son of Irish immigrants, he was born and raised in Chicago. Although he initially studied still photography, Quinn changed his career plans after discovering Italian neorealist and French new wave films. Seeing Francois Truffaut’s movie The 400 Blows—“a powerful story about regular people”—compelled him to shift to filmmaking and to enroll at Columbia College Chicago.

Finding his posse: At Columbia, Quinn forged a friendship with fellow student Michael Goi ’80. When they were looking for people to star in their student films, they convinced Quinn’s younger brother, Aidan, to get in front of the camera. Aidan loved performing so much that he soon enrolled at Columbia and would go on to a successful acting career (Desperately Seeking Susan, Legends of the Fall, Weeds, Elementary).

Big break: After moving to Dublin, Ireland, Quinn worked at startup film editing company Windmill Lane Pictures, which shared space with a facility where an up-and-coming band called U2 was recording. Windmill partner Meiert Avis had already directed one of the band’s videos, and enlisted Quinn as camera PA for the band’s follow-up video, “Gloria,” then promoted him second camera operator for “New Year’s Day.” Says Quinn, “We had to finish the video quickly for MTV. It’s called ‘New Year’s Day,’ so it was going to premiere on New Year’s Day [1983] worldwide—U2 were becoming popular then, and it was their first big thing for America. I remember working overnight, editing, for four or five intensive days to get it done in time. It debuted on New Year’s Day and was amazingly received. It was exciting.”

Being versatile: "Probably part of the reason [director] Mike [Figgis] chose me for Leaving Las Vegas was because he knew I could shoot Super 16 and make it look pretty decent. … The quality of a good cinematographer is not just to know how to technically do something, but know how to support a story. Every film is going to have a very different approach—a raucous comedy [like Hot Tub Time Machine 2] is a very different kind of storytelling than a Leaving Las Vegas or an In America. You get your head around the parameters of the film, working with the director, and then find a language for that particular type of story. … Part of our business is that we’re in the fashion business. If something’s popular for a while—certain techniques, certain filters, certain camera styles—we have to be students of that as well in order to stay relevant in the business, and then try and make it our own at the same time."

Best advice: "I was doing a movie called Get Rich or Die Tryin’. 50 Cent was the star. We’re shooting, I think, our third Saturday in a row—long days, and it’s three, four o’clock Saturday morning and we’re still working. I was griping to my camera assistant, and 50 walked in. He just came up to me and gave me a big hug and said, 'Do what you love, man! You got to do what you love, then that won’t bother you.' … Your attitude can shift, and you can get grumpy and fall into that negative side of things when you’re tired, but you can also pull yourself out just as quick with the right attitude: I am doing what I love. I’m here, it’s good. It’s hard, it’s tiring, but here I am."