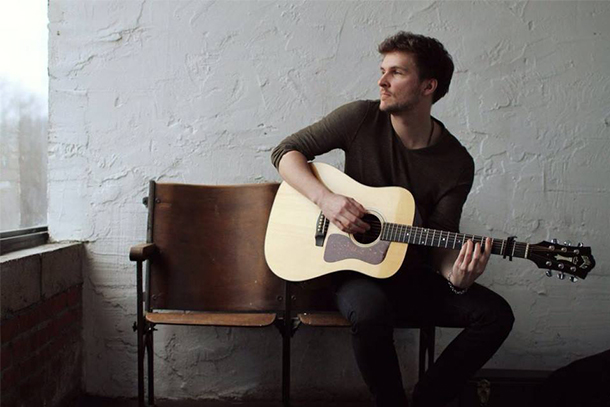 “I knew what I wanted to do—I just had to figure out a way to get there.”

Brad Paisley, Miranda Lambert, Kristen Kelly: Guitar player Derek Bahr ’10 has shared the stage with some major country artists. From growing up strumming in Colorado, to joining bands and writing songs at Columbia College Chicago, to migrating to Nashville with dreams of arena tours, Bahr has been chasing his aspirations across the country. Today, he does road work for several bands, either working as a substitute player or a full-time band member for an entire tour. Here, the in-demand guitarist shares some stories from his lifelong love of music and performing.

On his songwriting beginnings: I started playing guitar when I was 9. I’ve been writing songs forever. I had a whole notebook of songs by the time I was 6. One was called "1987," 'cause that’s the year I was born.

Columbia’s eclectic approach: One of the reasons I chose Columbia is because it’s not just a music school. I was able to create my own thing. At Columbia, you can kind of take it by the horns and create your own experience.

His first job in Nashville: I was unloading freight trucks at World Market for a couple months. I went out every night, tried to meet people and hang out. Went to bars and events and shows.

On Nashville cover bands: In Nashville, the cover band thing is to do four-hour sets of country covers. You don’t take a break—it’s four hours straight through. I would do that on Broadway, which is like the big, flashing lights, tourist-y part of town. I was playing two or three days downtown in Nashville, then [the band] would go on the road in a big, 16-passenger van and go play bars and clubs all over the Southeast. I did that for a year and a half, two years, started making more connections and more friends, playing with bigger artists, major label artists.

His big break: My first big gig was in 2013 when I got the chance to play with a group that was on the Miranda Lambert/Dierks Bentley co-headlining tour. That was the first time I got to play arenas and amphitheaters to crowds of 15,000. I got that gig just by going out every night when I first moved to town and networking my butt off. I saw a friend of mine at a bar one night, and he told me he got the call to play for this band, but that he was busy and couldn't do it. So he gave my contact information to the band leader, and I got the gig just like that.

Fitting in and standing out: Columbia got me ready for the real world, in a sense. I knew what I wanted to do—I just had to figure out a way to get there. Learning how to navigate a big institution helped me out.

Future Plans: What I have my eyes on, moving forward, is to start doing more sessions (meaning playing guitar in the studio on people's demos and records), and to start getting more disciplined with song writing. I've done some of each of those things, but I would like to do more! As for attempting a career as a solo artist, I really have no desire to pursue that. I have plenty of fun just getting to be on stage and rocking out in front of big crowds, without all the responsibility and added stress that an artist has to deal with!

Stage lights: On the road with Miranda Lambert or Kristen Kelly, we played huge ampitheatres. The arena tour—that’s what I moved to Nashville to do. To get on these arena tours and play to tens of thousands of people. It’s a dream come true.