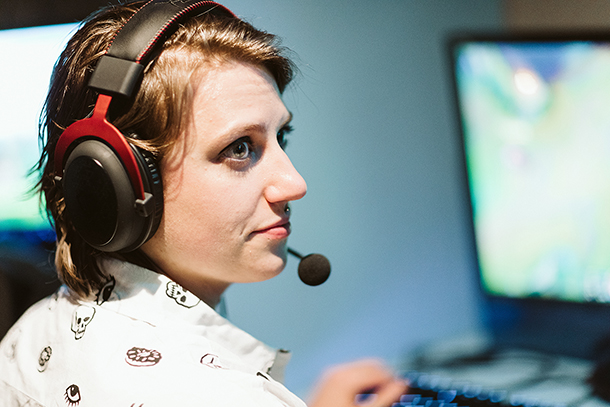 “If you have a kid of any gender and you want to teach them to play games, teach them to be empathetic toward whoever is on the other side of that screen. Then we’ll become a much more welcoming community for everyone.”

As an associate producer at Riot Games, EJ Baker works on the production of set design for large-scale esports events at venues around the world.

Lights flood the stadium. Jumbo screens loom over center court. Sellout crowds cheer on two elite teams vying for a world title at the Staples Center in Los Angeles. Millions of fans around the world tune in to a live broadcast. But there’s not a basketball in sight.

This isn’t an NBA playoff—it’s the championship for League of Legends, one of the world’s most popular video games. League of Legends draws more than 100 million active players per month, and its 2017 World Championship offered a $4 million prize for the winning team—just one example of how massive eSports video game competitions have become.

“It’s insane just how popular eSports has become,” says EJ Baker ’12, an associate producer at Riot Games, the creative force behind League of Legends and its worldwide competitions. “We have multigenerational families that are Yankees or Cubs fans. I’d love to see multiple generations of eSports fans,” they* say, noting that many schools offer eSports scholarships as a pathway for aspiring professional gamers.

Baker works primarily on the production of set design for Riot Games’ large-scale worldwide events, translating online tournaments to venues around the world. (Last year, the world championship was held in China.) They collaborate with event managers and artistic designers to build sets that captivate audiences, both in person and on broadcast platforms like Twitch and YouTube. “The most challenging part of my job is the sheer amount of moving parts involved with producing an event,” says Baker. “That’s what I love about it. There are always ways to improve.”

Baker’s journey began at Columbia College Chicago, where they originally studied Musical Theatre. But they realized their dream of performing on Broadway wasn’t in the cards, so they pivoted to Animation. Associate Professor Jim Rohn became their mentor. “I cannot thank him enough for being as supportive as he was,” Baker says. “It was really easy to get integrated with the Interactive Arts and Media Department’s game development program. That’s how I got into programming.”

After graduation, Baker moved to Seattle to work in software development. Meanwhile, they were increasingly interested in video games. “I went to BlizzCon one year and stumbled into the live StarCraft world championship finals,” they say. “I had no idea that this world even existed. It was incredible. In that moment, I decided that I wanted to do this.” Fast-forward a few years, and they started organizing their own StarCraft 2 tournament online, just for fun. Eventually, a coworker who previously worked at Riot encouraged Baker to apply for a job as a production coordinator at their New York office. Early this year, they were promoted to associate producer. “I got here because I decided that it was a thing I wanted to do, so I did it,” Baker says.

Baker observes that there’s a dichotomy between their work life and their experience as a gamer. Professionally, they haven’t felt discriminated against, though it can feel isolating to be one of the only people in the office who was assigned female at birth. But being a gamer is different. “There’s still a lot of sexism, homophobia, transphobia, and racism. If I’m on a game where I can speak, and someone realizes that I’m a girl—or they think I’m a girl—oftentimes I get hit on … or told I don’t belong. There’s not a whole lot in between.”

Baker’s solution? “If you have a kid of any gender and you want to teach them to play games, teach them to be empathetic toward whoever is on the other side of that screen. Then we’ll become a much more welcoming community for everyone.”

*Baker identifies as nonbinary with the preferred pronouns of they/their.