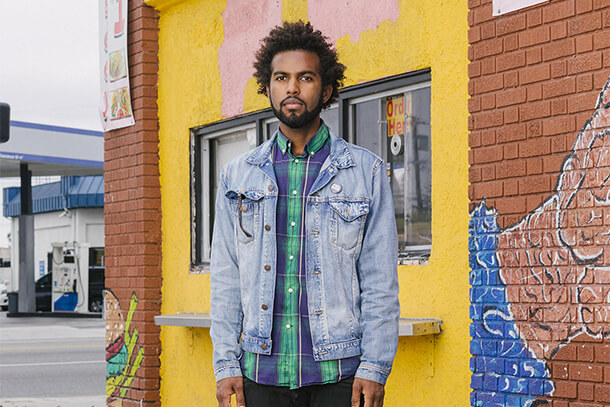 “I still wake up on some days and ask myself, ‘Is this really my life?’”

At just 33 years old, Hill’s installation and performance art has been featured in museums all over the world. His work often focuses on physical endurance by incorporating his body into the gallery space: In his 2016 piece “A Monumental Offering of Potential Energy” at the Studio Museum in Harlem, he lay on a platform surrounded by the neon-illuminated tracks of a rollercoaster every day that the museum was open for three months.

Hill’s impressive trajectory has taken on the shape of a snake shedding its skin: a constant cycle of rebirth and leaving behind. Here he talks about three career-defining pieces, from his first performance piece in a Columbia classroom to his latest three-month exhibition at the Hammer Museum in LA.

Hill first began thinking of his artwork as a space for experimentation and play at Columbia. One of his first performance pieces happened in a Columbia classroom. “I just sat in a chair in class and bowed my head and opened my mouth and just waited for saliva to collect and start falling in my lap,” he says. “I sat like that for about 15 minutes.”

When asked about the result of that performance, Hill shrugs. “Saliva pooled in my lap, you know? I had wet pants for the rest of the morning.”

Hill’s mostly performance-based work often involves physical endurance, as he uses his own body to address the politics of race and gender. In a 2014 gallery performance, he tied a rope to a chain-link fence and jumped over it for two hours before collapsing in exhaustion. In another recent piece, he donned a tuxedo and crooned, lounge-singer style, about feminism from his own (black, queer) perspective: “I know what it feels like to have my body policed,” he sang.

Hill, who grew up in Los Angeles, ­­­found a niche in Columbia College Chicago's Fine Arts BFA program, where “there was an opportunity to intimately connect with other people.” Professors Joan Giroux and Adam Brooks were particularly influential, as was an apprenticeship with artist Theaster Gates—part of Hill’s prize for winning the department’s annual Pougialis Fine Art Award.

For the prize-winning performance, he dressed in a uniform as a nod to his Catholic school days, then disrobed in front of an audience and shaved his entire body—even his eyebrows.

“As I was getting deeper into this art and performance thing, I was losing people who weren’t on board with some of the things I was exploring,” he says. “So [that performance] was a shedding—quite literally.”

Winning the Pougialis Fine Art Award spurred on his ideas and confidence. “I can do this thing and then people can regard it, think about it, talk about it, hate it,” he says. “That bump of recognition was kind of a fuel.”

After Columbia, Hill went on to earn an MFA from the University of California, Los Angeles, and he is currently an artist-in-residence at the Studio Museum in Harlem, New York City. “I’m living in New York City for the first time ever, with such an incredible support system through the museum, and with direct access to their rich and dynamic history,” he says. “I still wake up on some days and ask myself, ‘Is this really my life?’ Fortunately, because of my time at Columbia, and of course a slew of other factors, I can answer that ... with a calm and resounding ‘yes.’”

Hill’s latest installation piece at the Hammer Museum was an act of physical endurance. He began the project by running “victory laps” around six schools he attended in LA—reasserting his presence in spaces where he hadn’t always felt welcome. Then, for the three-month run of “Excellentia, Millitia, Victoria,” he spent nine hours a day standing on the top step of a winner’s podium—no breaks allowed. The room was decorated with photos from his victory laps, and the neon text behind him read, “Where on earth, in which soils, and under what conditions will we bloom brilliantly and violently?”

“[‘Excellentia, Millitia, Victoria’] was a musing of conquering the spaces that we felt conquered by, repositioning our bodies in relation to those spaces,” he says. “Thinking about how to, again, shed and let go of the things we no longer need by exercising them out.