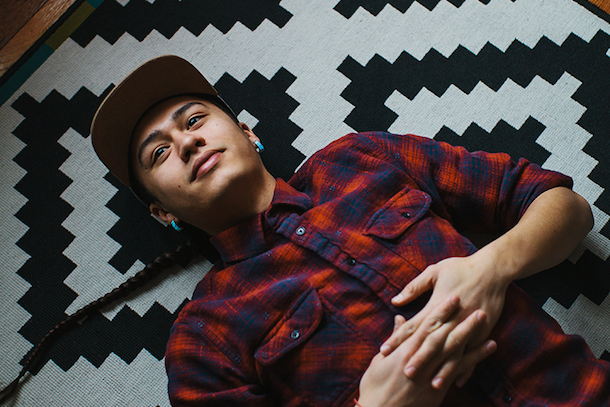 “Whenever I went back to our culture, I knew why I was alive. It tells you who you are. ”

By reconnecting to his indigenous culture, rapper and activist Frank Waln ’14 found a sense of purpose. Now, he hopes to help other Native youth do the same.

Waln grew up on a ranch on the Rosebud Reservation in South Dakota, one of the largest and poorest reservations in the country. “The reservation where I’m from is the size of Rhode Island and there’s one stoplight on the whole reservation,” he says.

He excelled in high school and received the Gates Millennium Scholarship, earning him a free ride to the college of his choice. Opportunities like that are one in a million on the rez, so Waln decided to shoot for a high-earning profession, studying premed for two years. But he had been writing and recording rap with his cousins since he was 15 and knew he wanted to make music one way or another, so after taking a break from school, he finally decided to follow his passion by entering Columbia College Chicago’s Audio Arts and Acoustics program.

“I always knew I wanted to help my people; I just didn’t realize I could do it through what I love,” Waln says. “It took me a couple years to figure that out.”

Waln says Columbia shaped him as an activist. A Culture, Race, and Media class taught him to deconstruct popular media and learn why, for example, a girl he met on the elevator thought Native Americans were extinct. And the professor of that class, Claudette Roper, put herself on the line to get Waln on stage while he was still in school. She refused to speak at an international conference in New York unless he was allowed to perform there.

With every performance, Waln shows his culture is anything but dead. He raps about his contemporary struggles, like growing up on a rural reservation where the unemployment rate sometimes hits 80 percent, in an ethnic community with the highest rates of substance abuse, sexual assault, and suicide. He also mixes Native music into his sound and features indigenous dancers sporting handmade regalia in his music videos and live performances.

“I think it’s a good example of how our culture is alive and living and breathing,” Waln says. “There are pieces of the past, yet it’s also very new.”