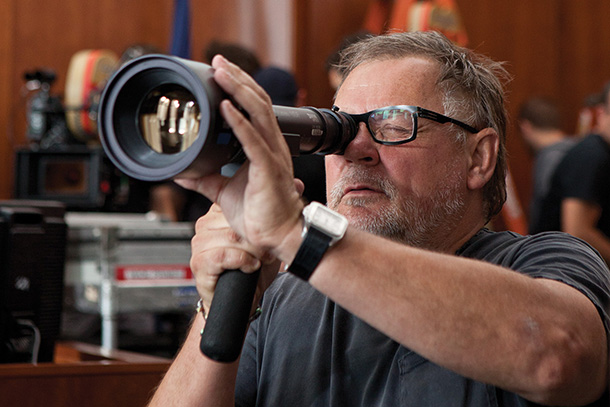 “We made mistakes, but we learned from the mistakes.”

How did you choose cinematography as your focus?

Becoming a cinematographer was totally accidental, simply because I didn’t know much about cinematography. I knew about producers, directors, and stars, but I didn’t know much about cinematography because it’s a profession that’s not really as celebrated as the others. By accident, I chose this little stick we had to pull in our first class. The class was divided in groups, and there were four members in each group: One had to direct, one had to shoot, one had to produce, one had to act. I got the camera stick—and I liked the whole thing with the camera that you could actually put your hands on. You could focus the image. You could move the camera. You could light, and you could get the image. It was very exciting.

How would you describe the Columbia educational experience?

The school created this great opportunity to be able to just grab the equipment and go and shoot whatever we wanted. We practiced how to expose film, how to compose. I could actually have the camera, load the film, break the sprocket holes, you know, because I threaded the film the wrong way. We made mistakes, but we learned from the mistakes.

After graduation, Kaminski moved to Los Angeles to attend American Film Institute, determined to make the necessary contacts to eventually become a cinematographer. A classmate’s husband worked with B-movie producer Roger Corman, and Kaminski scored the job as key grip (lighting and rigging technician) for 1988’s Not of this Earth, a science-fiction vampire movie. When the gaffer (electrician) quit, Kaminski moved into that role and offered the key grip job to his friend Mauro Fiore '87, who would go on to earn an Academy Award for cinematography for the blockbuster Avatar in 2010.

What do you consider to be your big break?

Shooting a little television movie for Diane Keaton [1991’s Wildflower] was a big break because it was a nice story. It was a fast schedule. From there on, I had a clear path to shoot other television movies, pilots, and, eventually, mainstream movies. I got an offer from [Steven] Spielberg to shoot a little pilot for his company, and I think that pilot [Class of ’61] really was my break. He knew television so he liked the whole idea that I could move fast. I was young, uninhibited by the whole studio system. He wanted a different point of view. He got it from me.