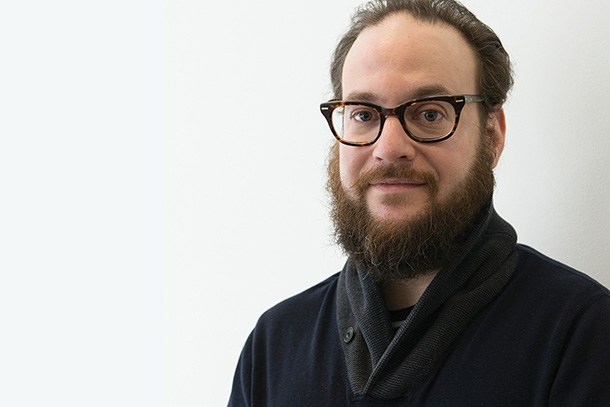 At Columbia College Chicago, Lazarus developed what he calls his “artistic arsenal.”

Photographer-meets-pop-artist Jason Lazarus is out to smash expectations.

In Self-portrait as an artist burning down the Museum of Contemporary Art, photographer Jason Lazarus dons a grey ski mask and sloshes gasoline down rows of stone steps. The photo, part of his 2004 to present series, could also offer an appropriate representation of his artistic career—as an image-maker constantly breaking artistic conventions and rethinking creative definitions. He is currently an Assistant Professor of Art and Art History at University of South Florida and an artist-in-residence at Mana Contemporary Miami.

“Photography is such a megaphone way of communicating ideas. It says, ‘Look at this, look at that,’” says Lazarus. “And I’m very cautious, or sometimes uncomfortable, with that role.”

At Columbia College Chicago, Lazarus developed what he calls his “artistic arsenal.” Now, he teaches as an adjunct professor at his alma mater, where classes such as Photo 2 (an introduction to Color Photography) allow him to revisit photography basics that continually affect his own work.

Raised in Kansas City, Mo., Lazarus eschews the idea of artist as privileged thinker or sole authority, using his work to bridge the gaps between high art and popular culture. This juxtaposition comes to play in his recent film with Eric Fleischaur, twohundredfiftysixcolors, a collection of GIFs animated on old-school 16-mm film, which Time Out magazine named one of the top film moments of 2013.

Lazarus also curates several archives, through which he considers himself an editor as much as an artist. “I work with my own images and existing images fluidly,” he says. “I don’t differentiate my own as more important.” Many of the archives highlight a specific kind of nostalgia. In NIRVANA, Lazarus poses a simple question to the public (“Who introduced you to the band Nirvana?”), then collects both an image of the respondent and the written memory. In the Too Hard to Keep archive, Lazarus solicits photographs and memorabilia from owners who deem the items too emotionally traumatic to hang onto.

“You make certain sacrifices to be a cultural producer as opposed to a business person. There’s less money, different kinds of risk, and different validation that you’re looking for,” says Lazarus. “I feel really lucky that at a certain age I just started to explore something new, and I was willing to sort of start over.”

Whether he’s hanging his work in the MCA or pouring gasoline on its steps, Lazarus’ artistic voice is burning bright.