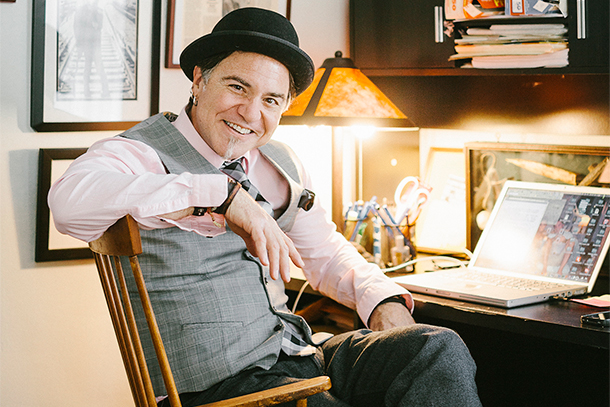 “I never really saw a distinction between writing films, television, comic books or literature. To me it’s all part of the same storytelling pot.”

Jay Bonansinga brings The Walking Dead to life with a series of spin-off novels.

At least five days a week, Jay Bonansinga gets up in the morning and puts on a jacket and tie. But he doesn’t leave home. Instead, he begins writing—hammering out at least 1,250 words—some six daily pages that lead to a novel in four months. The workmanlike pace serves the author well. In 2011, Bonansinga stormed onto The New York Times bestseller list with The Walking Dead: The Rise of the Governor, a novel spin-off of the popular comic book and television series created by Robert Kirkman. The novel has since spawned three sequels and Bonansinga has penned additional books set in the The Walking Dead universe that have been met with great acclaim.

The business dress, partly an homage to The Twilight Zone creator Rod Serling—a mesmerizing hero of his youth—is also a reminder of the professional task at hand. And in a writing career that spans more than 20 years and 20 books, Bonansinga has professionally embraced everything from corporate freelance gigs to historical nonfiction to zombie prequels.

“I never really saw a distinction between writing films, television, comic books, or literature,” says the Evanston-based Bonansinga, whose 2004 nonfiction debut, The Sinking of the Eastland, inspired Eastland, the Lookingglass Theatre’s Tony Award-winning musical. “To me it’s all part of the same storytelling pot.”

A film student with a focus on screenwriting, Bonansinga says the visual medium of his schooldays continuously pushes his work, especially now that he’s contracted to write four more Walking Dead novels.

Right out of Columbia College Chicago, Bonansinga says his big break came out of his darkest days. When financing fell through on a $1 million action movie set in Chicago, effectively spoiling his directorial debut, Bonansinga dropped into a depressive funk. “I said, ‘Never again.’ I knew I had to get a manager or an agent to protect me,” he says. “And I decided to write these ideas I had for films as books. Then I could only lose the words on the page.”

The author’s first novel, The Black Mariah, a Bram Stoker Award finalist published in 1994, led to collaboration with George Romero on the film adaptation. Another of Bonansinga’s cinematic heroes, Romero created the 1968 cult classic Night of the Living Dead. “Having Romero’s cell phone number could be the reason I got the Walking Dead job,” he jokes.

In 2009, Bonansinga returned to his filmmaking roots, reworking an old short story into Stash, a mockumentary starring Tim Kazurinsky and Marilyn Chambers that’s set around a service that discretely removes pornography from a deceased person’s home. Independently financed and produced for $120,000, Stash was a film festival favorite and appeared in some 50 million households through On-Demand services.

But it’s the work, that storytelling, that gets Bonansinga into a coat and tie each day. He doesn’t feel like he’s slumming when writing about zombies or being particularly highbrow when writing nonfiction. He’s simply all in. “That’s maybe the key to surviving as an artist,” he says. “It’s a crazy and fickle business that’s full of heartache. You need to get to a place where you really enjoy the stretching of the canvas, or the editing—really every aspect of the work.”