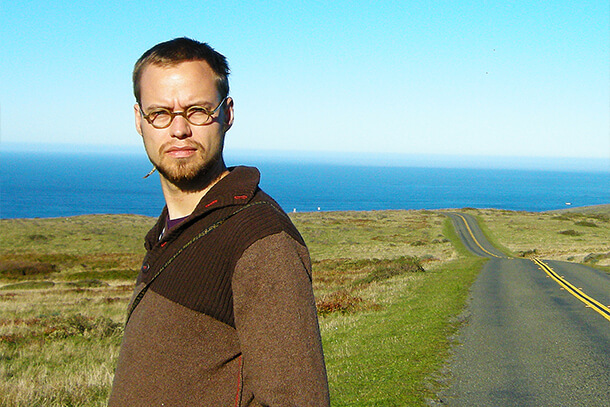 “The school has a tough side that I admire, one that doesn't sugarcoat the challenging aspects of being driven by your creativity.”

Jeremiah Barber’s sculptures and videos “draw on the silly side of surrealism,” he says. “I make performance art, essentially, though not always the kind of performance that can be seen live. I think of the sculptures and videos I make as performance documents.” He often collaborates with his partner, writer Ingrid Rojas MFA ’06, on lyrical, dramatically beautiful work that explores dreams, memories and the couple’s own relationship.

Falling in Love with Performance

At Columbia, Barber studied under faculty member Mat Wilson, whom he credits for cultivating a “breakthrough moment” when he discovered performance. “He showed us a half-dozen performance art videos on the first day, and then essentially said, ‘OK, now you're going to make a performance every week.’ We had a very strong group of artists in that class,” says Barber. “We challenged each other, propelled by competition and the wry feedback of professor Wilson. Some of the best performances I've ever seen happened in that class.”

The Fine Arts BFA program placed a “strong emphasis on … developing a personal aesthetic, treating your fellow artists as your kin and community and collaborators, respecting your own and others' authorial voices,” Barber says. “The school has a tough side that I admire, one that doesn't sugarcoat the challenging aspects of being driven by your creativity.”

After graduation, Barber spent a year “figuring out my place in the art world,” running a gallery out of his apartment and launching a zine with friends before earning an MFA from Stanford University in 2010.

Since then, his exhibitions have appeared at Cue/New York, San Francisco Arts Commission Gallery, and the Mission Cultural Center (San Francisco).

He was recently awarded a Eureka Fellowship from the Fleishhacker Foundation and a residency at Recology, a recycling company in San Francisco, where he creates new work based on found materials. “This has allowed me to expand my studio practice and focus on my art making full time,” he says. “I'm in the middle of an incredible year.”