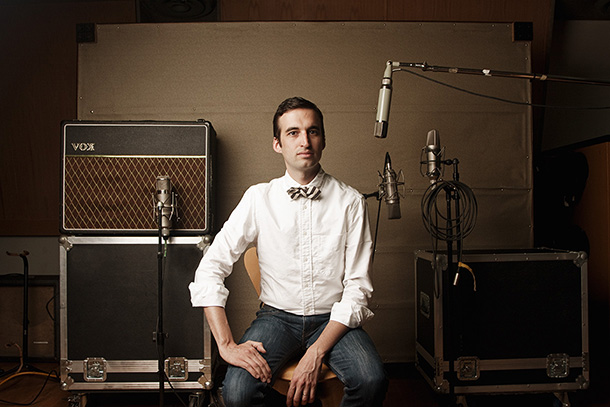 “In high school, I never sat in the front of the class. At Columbia, I sat by the seat closest to the teacher every time.”

Jeremy Lemos will sometimes trek through four states in as many days, running on very little sleep in a fast-paced, high-stakes work environment.

How high are the stakes? Lemos, who studied audio engineering at Columbia, will often mix and engineer live sound for a band he’s just met—without the benefit of even a sound check where musical kinks can be worked out—in front of festival crowds of 10,000 people.

The pressure is always on, but for Lemos, the chance to travel around the country playing, mixing and listening to music is an irresistible opportunity.

From ’Burbs to Big Shots

Originally from suburban Wheaton, Ill., Lemos says he spent his teen years driving to Chicago to attend punk shows at the Fireside Bowl and to shop at Reckless Records.

After initially considering a career in radio—he even interned at WXRT at one point—Lemos transferred from Southern Illinois University to Columbia College Chicago after taking an audio production class at Columbia on a whim. Since graduating in 1999, Lemos has toured with some of rock’s most acclaimed acts: noise pioneers Sonic Youth, Americana sensations The Head and The Heart, and folk-rock legend Iron and Wine, among others. He also ran his own studio, Semaphore, for 10 years, and has worked with producer Jim O’Rourke (Wilco, Beth Orton) as an audio engineer on multiple projects.

About his time at Columbia, Lemos says he most vividly remembers the ear-shredding antics of professor Malcolm Chisholm, who taught an active listening course. Lemos says Chisholm, a former Chess Records producer, would play music so loudly that students came armed with earplugs by the second day. Lemos says that instructors like Chisholm gave him newfound motivation.

“Columbia represented a direct line between who I was and who I wanted to be,” Lemos says. “In high school, I never sat in the front of the class. At Columbia, I sat by the seat closest to the teacher every time.”­­