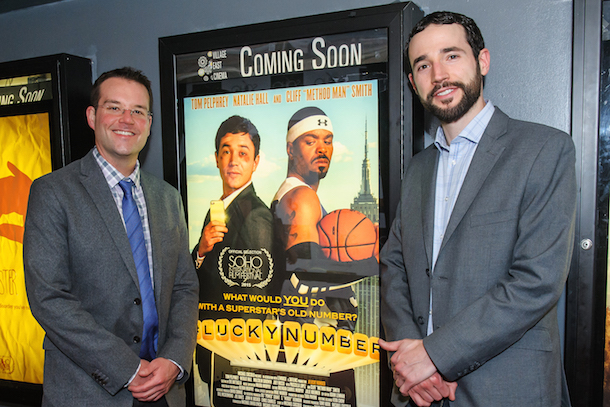 “[We] found that writing and producing was our niche, so we decided to utilize those skills at Throughline Films. ”

You never know who you’ll meet in class. John Bosher and Chris Charles met as students at Columbia College Chicago in the mid-2000s. After graduation, they founded the production company Beverly Ridge Pictures, and then in 2012 founded Throughline Films, which executive produced the award-winning feature Animals, made by Collin Schiffli ’09.

We caught up with Bosher and Charles to talk about what’s on the horizon for Throughline, which has grown into one of Chicago’s premier independent production companies.

"After graduating from Columbia and working in the film business for a few years, the Beverly Ridge team decided to pursue different career paths,” says Charles. “John and I found that writing and producing was our niche, so we decided to utilize those skills at Throughline Films.”

Throughline is particularly excited for upcoming feature The Wrong Man, based on a novel by the same name. Veteran producer and Chicago native Paul Pompian recruited Bosher and Charles to work on the project in 2011, and they co-wrote the screenplay with fellow Columbia alum Joshua Staman ’07. “We went through many ups and downs trying to get it off the ground,” says Charles. “Then we suffered the ultimate setback when Paul passed away unexpectedly in 2014 … But this loss made us all the more determined to ensure the film gets made in Paul’s honor.”

Bosher and Charles are gearing up for a host of other projects, too. They executive produced a comedy called #Lucky Number, starring Cliff "Method Man" Smith of the Wu-Tang Clan, which was released via video-on-demand and DVD in September 2015. Throughline also co-produced a handful of upcoming films, including the comedy Lost in Austin, starring Linda Cardellini, Craig Robinson and Kristen Schaal, and the horror film Zone of Silence, directed by visual effects icon Andy Fowler.