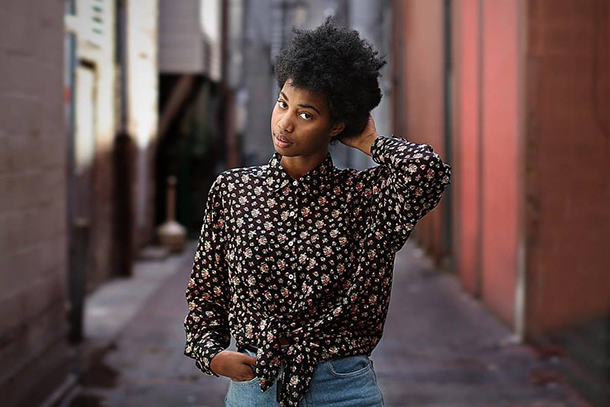 “Everything moves so, so fast when working on a brand that big.”

In any sport, a huddle is a strategic moment, the preplay meeting of the minds where teams plan their final attack to seek victory and glory: a way of bringing your team together while simultaneously keeping your plans hidden from the other team. The LeBron James "Together" Nike ad takes a twist on that idea: the huddle includes LeBron, his Cavaliers teammates—and the entire city of Cleveland.

Jordan Dinwiddie is proud to call this her first ad campaign. “Normally the huddle is a process that is very secret to the basketball team,” she says. “By letting the city join that process, it shows that LeBron is not only ready to lead this team, but lead this community to something greater.”

After graduation, Dinwiddie was hired by Portland, Ore.-based ad agency Wieden + Kennedy. W + K is an international company that works on some of the biggest brands in the world, including Nike, Audi and Gap. In her first post-grad ad campaign, she joined the team developing the Nike campaign. Since going live in October 2014, the “Together” ad has gone viral, earning millions of YouTube views and shout-outs in Rolling Stone and Sports Illustrated.

Be Prepared to be Unprepared

Copywriting consists of much more than just sitting at a keyboard. On the Nike campaign, Dinwiddie helped with ideation, writing the script, and being on hand through storyboards and final filming. “I did a bit of everything,” she says.

While at Columbia College Chicago, Dinwiddie’s look book for Nissan Automotive won a National Ad Competition hosted by the American Advertising Federation. She points to college mentors like Shanita Akintonde and Peg Murphy for pushing her to be a better advertiser and copywriter.

Dinwiddie helped generate the idea for the Nike ad, and she says things have just been accelerating since then. “You really can’t be prepared, especially for a brand that large,” she says. An account that size, featuring a name that big, makes the creative process move quickly. “We were given the task of making LeBron’s return a major event, which it is,” says Dinwiddie, “Everything moves so, so fast when working on a brand that big.”

This first foray into video advertising hit really big, but she humbly points out that it’s all about narrative and writing. “It really showed that advertising doesn’t have to be evil. You can connect; you can really tell a story.”