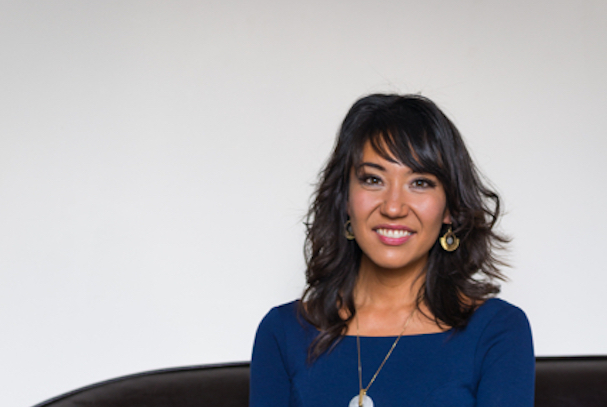 “I wondered how somebody could create the mechanism to let me enter their world to such a degree where I believed I was there.”

As a filmmaker, Kazuko Golden sheds light on the internment of Japanese-Americans during World War II.

As an undergraduate student at Earlham College in the 90s, Kazuko Golden MFA ’14 studied abroad in Northern Ireland during “The Troubles” and in South Africa during the Anti-Apartheid Movement. Whether checking for bombs under her car or hearing Nelson Mandela speak, she felt something missing from her adventures: a video camera to document the history she was witnessing. In 2012, she enrolled in Columbia College Chicago’s Creative Producing MFA program. Here, she wrote, co-directed, and produced A Song for Manzanar, a short film about her grandmother’s time in Manzanar, an internment camp where 11,000 Japanese-Americans were forcibly detained during World War II. Golden continues to make shorts and now works at Starz as a distribution coordinator. Below, she discusses how movies can shape our perception of history.

My family really loved film. I remember sitting with my dad at home and watching Siskel and Ebert. My dad wouldn’t want me to go to any movies that didn’t get two thumbs up. He’d always ask me, “Does that film have two thumbs up?” This was when he was giving me an allowance, which I wouldn’t get unless I went to critically acclaimed films.

What was the first film that made an impression on you?

Schindler’s List. I remember being completely depressed afterwards, but also fascinated that the visual imagery could change my life. I wondered how somebody could create the mechanism to let me enter their world to such a degree where I believed I was there. It educated people. I learned about the Holocaust in school, but once I saw Schindler’s List, it was a totally different story for me.

A Song for Manzanar educates the viewer on the internment of an entire people. What was it like filming such a historical story?

Well, we shot it in the Manzanar compound (now a historic landmark). One of the beautiful aspects of the film is that three-fourths of my actresses and actors were Japanese or Japanese-Americans. But most of them had never even heard of the internment. For them, it was life changing. It caused them to go back to their grandparents or back to their parents and ask them about the camps. Some of them learned that their family had also been interned. One of the effects of that historical period is that the Japanese-Americans left the camps and wouldn’t talk about it. They were proud Americans. My grandmother was silent about it.

How did you land your job as a distribution coordinator at Starz?

I was temping while I was taking classes out here in LA through Columbia. It got me into working at Lionsgate, Fox Sports, CAA, and Relativity. Along the way, I started seeing the personalities of the executives that I was assisting and the studios where I was working. I familiarized myself with the projects they were working on, the projects that I was interested in, and where I wanted to work. After working at six different studios and being an assistant, I ended up at Lionsgate and loved the projects there. Lionsgate acquired Starz, and I was extremely excited because I loved the Starz programming. Coming from Lionsgate allowed me to transition into Starz and bring operating knowledge to streamline work I was tasked with.