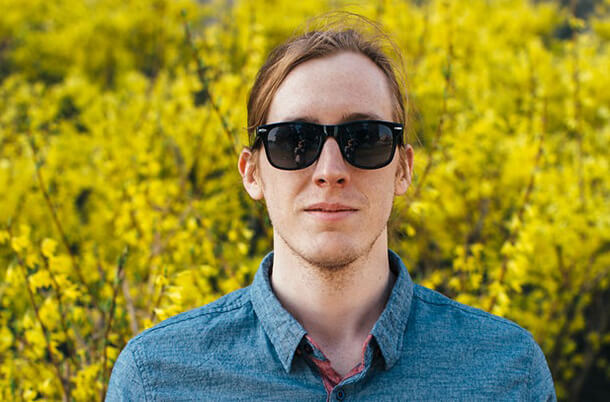 “A lot of people don’t think there’s a lot of creativity in programming, but I think it’s as creative as visual design. You’ve got to always think about user experiences.”

The large-format touchscreens Kevin Bolander ’13 created when he was a software developer at Elevate Digital looked like props from a futuristic movie. Bolander developed apps for the 72-inch screens used by companies like American Red Cross and Walgreens that show up everywhere from airports to city streets. In summer 2014, he worked on Coca-Cola’s “Share a Coke” campaign. Users could walk up to a touchscreen, select their favorite Coca-Cola product, snap a photo of themselves, and send it to a friend. One screen even popped up near Columbia College Chicago, right on Michigan Ave.

Now a senior user interface (UI) developer at Conversant, Bolander thanks Columbia’s emphasis on both technical and creative skills for his success and real-world prep. “A lot of people don’t think there’s a lot of creativity in programming, but I think it’s as creative as visual design,” he says. “You’ve got to always think about user experiences.”

When Bolander enrolled in college, he planned to study drawing. When a Columbia professor introduced him to programming, he took quickly to the technical aspects while enjoying the inventive side of creating apps and interfaces.

“I fell in love with programming right off the bat,” he says. “I have a real artistic mindset for things, and I can handle programming, so I float between design and development.”

Bolander left school with plenty of practical experience on his resume already. During his senior year, Columbia sent him to South by Southwest Festival in Austin, Texas to witness all the technology debuts (including presentations by several Columbia professors). In his Intro to Games class, he created a Windows app called Swingsets, a simple touchscreen game that synchs to a user’s music library for an interactive, personalized soundtrack. The game took off, going up for sale on the Windows 8 store. After selling Swingsets for a year and a half, Bolander released the game for free download.

For Bolander, programming is about knowing how to fit things together—and take them back apart. “You break it, then you fix it, then you feel good, then you break it and fix it again,” he says. “It really just feels good solving problems.”