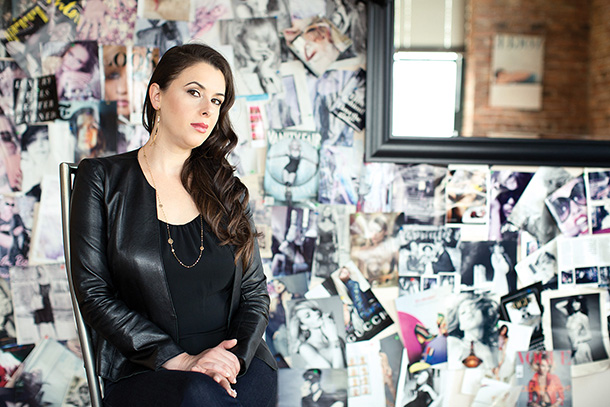 “I loved the idea that Columbia’s professors were in the industry while they taught.”

When jewelry designer Lana Bramlette was in fourth grade, she applied to her “dream job” in fashion, mailing in a (pretend) resume as part of a class project—and she actually received a response from the company. As a teenager seeking babysitting work, Bramlette says her father taught her to canvass the neighborhood negotiating deals by “creating demand.” “I was an entrepreneur from day one,” she says with a laugh.

Bramlette is nothing short of a visionary. Known to her clients as the “Queen of Hoops,” she creates delicate, minimalist, and wholly contemporary jewelry for her line, Lana Jewelry, which she launched in 2002. Her fans include Jennifer Lopez, Cameron Diaz, Rihanna, and Kate Hudson, and her designs are featured in films, TV shows, and magazines such as Lucky and Glamour. Bramlette, who founded the company with her husband, Rob Bramlette, runs the business out of Chicago with her partner and father, Naum Fertelmeister. “I love the city—it’s my home,” she says. “There’s no reason I can’t do this here.”

After attending high school in Lincolnshire, Bramlette headed to Columbia to pursue her vision. “I loved the idea that Columbia’s professors were in the industry while they taught,” says Bramlette, an Arts, Entertainment, and Media Management (now Business & Entrepreneurship) major. Thanks to faculty guidance, she had three internships in school and a job before graduation.

Bramlette believes the structure of her studies at Columbia provided a window into the rhythms of the fashion industry itself. “It’s really how it is in the real world,” she says. “In the fashion department, you had a project that was due at the end of the semester. In fashion, you have collections every four months.” In both cases, she says, “You have to deliver, and the only person you will ultimately answer to is yourself.”

The entrepreneur’s next step is to expand the brand. “I am a designer first. Right now my path is jewelry, but we are really building a ‘house,’” she says, referring to the term given to an established company designing many fashion products, such as Gucci or Dior.

If anyone has the drive to build a fashion empire in Chicago, it’s Lana Bramlette. “I’m a go-getter. I can sell ice to an eskimo,” she says. “That’s my game.”