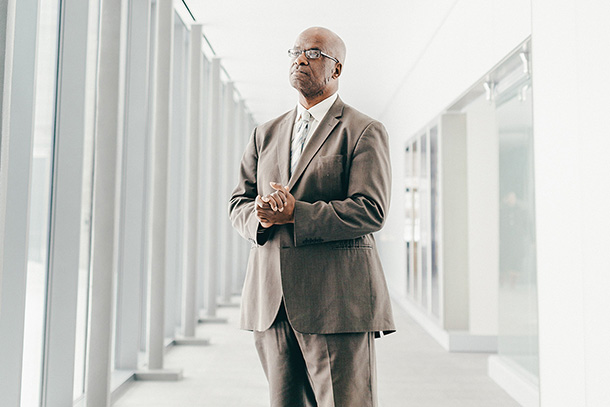 “Education is not learning a skill, necessarily; it’s opening the doors of your mind so that everything can be considered. That’s what Columbia did for me.”

Lee Bey was sweating it out on a May day in 2001. Less than three weeks into his job as Chicago Mayor Richard M. Daley’s deputy chief of staff, Bey found himself informing a room full of prized architects and Chicago Bears owners that the boss wanted a new football stadium to be shoehorned into the historic Soldier Field structure—instead of constructing a brand-new field elsewhere. Delivering the decision “nobody was happy about” forced the longtime journalist and architecture critic to improvise some serious diplomacy skills on the spot.

“I understood the gravity of what I was getting myself into,” Bey says, “but the fact that I could find the levers and ask the right questions to get this done—it was Columbia College Chicago that taught me that.”

Born in 1965 to working-class parents on the South Side, Bey fell in love with the city—particularly its architecture—at an early age. In high school, Bey took the advice of his English teacher and pursued journalism, writing for local newspapers and eventually enrolling in Columbia’s journalism program in 1985.

“It was an interesting time because Harold Washington was mayor, and there was this interest in African Americans being represented and [having] voices in the media,” Bey says. “I said, ‘This is where I want to be.’”

After graduating in 1988, Bey eventually landed at the Chicago Sun-Times, where he covered crime, gangs, and government scandals for three years. Then after writing an architecturally-themed piece that caught the eye of his editor, he became the Sun-Times’ first architecture critic.

The Foundation of a Career

As an architecture critic, Bey found his niche, using his weekly full-page column not only to critique new architecture, but to fight for the preservation of significant city landmarks, including those in Bronzeville, one of the nation’s most important centers of African-American urban history—and where Bey’s father had grown up.

“The city was moving to demolish [about eight] historic buildings that were the anchors of Bronzeville,” Bey says. “The city landmarked some, [and] they specifically saved the old Eighth Regiment Armory [the first U.S. armory built for an African-American military regiment] and turned it into a high school, on the strength of what we had written.”

After being handpicked by Mayor Daley to become his senior architectural design adviser in 2001, Bey managed the 18-month Soldier Field project and negotiated the creation of a green roof atop the $700 million expansion of Chicago’s McCormick Place Convention Center.

In 2004, Bey moved to the architectural firm Skidmore, Owings and Merrill to serve as the company’s government liaison. He then became executive director of the influential civic group Chicago Central Area Committee, all the while pursuing other creative outlets at WBEZ as a producer and host.

Today, Bey is civic engagement and special projects manager at the Arts Incubator with The University of Chicago Arts and Public Life Initiative, managing strategic initiatives and partnerships with arts organizations, community groups and civic leaders.

This Renaissance man says his time at Columbia informed his perspective. “Education is not learning a skill, necessarily; it’s opening the doors of your mind so that everything can be considered,” he says. “And that’s what Columbia did for me. To be able to take the strange turns that my career has taken—it takes a mind that’s open.”