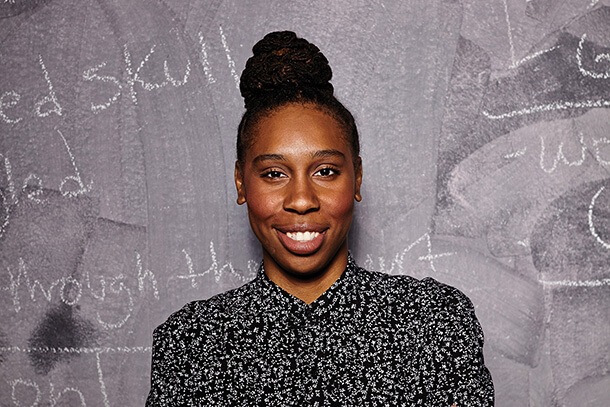 “The things that make us different, those are our superpowers.”

With a historic Emmy win and a Showtime series, Lena Waithe is taking over television.

No one is making huge career moves quite like Television alum Lena Waithe ’06. At the 2017 Emmy Awards, Waithe became the first African-American woman to win an Emmy for outstanding writing in a comedy series (Master of None, “Thanksgiving”). Later that year, Out Magazine named Waithe the Out100: Artist of the Year, an honor that celebrates extraordinary LGBTQ+ figures in American society. TIME named her among the 100 most influential people of 2018.

“The things that make us different,” said Waithe at the 2017 Emmys, “those are our superpowers.”

Waithe got her start in television when, at the end of her senior year, she completed Columbia College Chicago’s Semester in LA program, a five-week immersive experience with industry professionals—and she never left. Waithe stayed in LA to work on major television projects The Real World and Bones, which led to larger film projects such as The Secret Life of Bees and Notorious.

All the while, Waithe continued working on her own material. In 2011, she wrote a viral video, “Shit Black Girls Say,” and produced the 2014 feature film Dear White People, a satire about “being a black face in a very white place.” The film premiered at Sundance and earned the festival’s Special Jury Prize for Breakthrough Talent.

And her star continues to rise. In early 2018, hot off her Emmy win for Master of None, Waithe premiered her semi-autobiographical American drama series, The Chi, on Showtime. The show garnered positive reviews from The New York Times and the Chicago Tribune. She was also on the big screen as Aech in Stephen Spielberg’s Ready Player One, which premiered in spring 2018.

In 2019, Amazon Studios greenlit two seasons of Waithe’s next project: a horror anthology called Them, whose first season will be set in 1953 in segregated North Carolina. She has created and produced a number of television projects including Boomerang, Twenties, and an HBO comedy special for vlogger and podcaster Kid Fury.

“People always go ‘Damn, how you got all this happening at once?’” Waithe told The New York Times in an interview. “I tell them it’s the Chicago in me.”