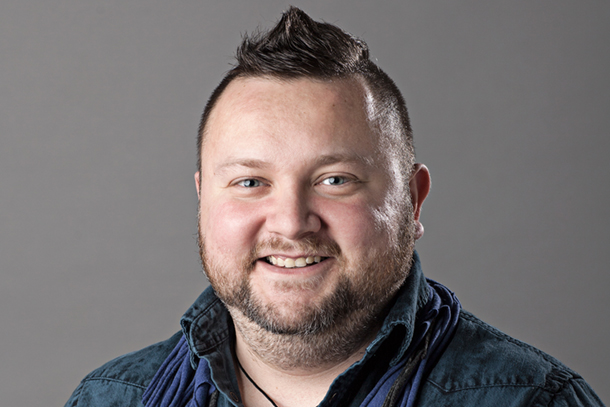 It began as a project for the college’s Space Heaters program, an initiative that encouraged students to create site-specific art in underutilized or unusual spaces on campus. Selvaggio installed vanity mirrors above four public drinking fountains in the college’s 916 S. Wabash building, each with a transparent overlay image of himself drinking from it. “Each time your face and mine meet,” he says, “a sort of hybrid is created.”

He recognized that the site itself had potential, and encouraged others to propose works for what he called the Fountains Foundation, which eventually hosted works by a number of artists, including Columbia professor Annette Barbier.

Connected to the College

Today, Selvaggio works in two roles at Columbia: as a workroom coordinator for both the Student Organizations and Leadership office and the Department of Exhibition and Performance Spaces (DEPS). He also exhibits his socially engaged, interdisciplinary and often interactive work locally, nationally and internationally. He’s found that staying connected to the campus has been integral to his success. “My work is always informed by a sense of community,” he says. “And the community supports my practice.”

Art for the People

“I’m not interested in making work for the white cube,” says Selvaggio. “I’m interested in making work for the people.” One of his most recent works, URME Surveillance, is an interactive, sculptural installation that invites viewers to “wear” the artist’s face as a mask as a way to avoid the omnipresent cameras of modern life. It “creates a space for visitors to ponder not only their relationship to surveillance,” he says, “but the malleability of identity itself.”

Other recent exhibitions included the outdoor installation If I Can’t Be Seen for McLeish Field Station at Smith College, and URMEDEMIREVERSOPTICON at the Paul Robeson Galleries at Rutgers University.