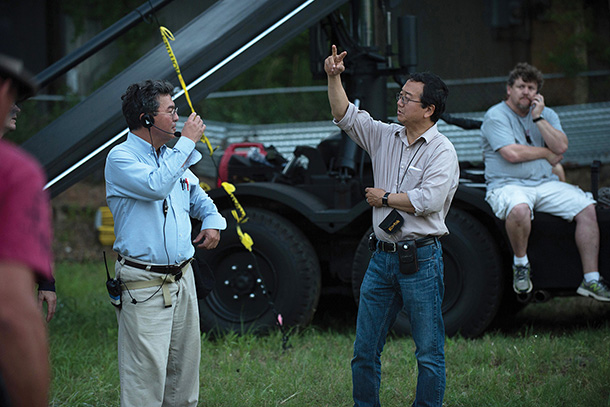 “As soon as you think you’ve made it, then you have nowhere to go but down. I don’t think I will ever make it, and I hope I do never make it because then it’s all over. ”

Cinematographer Michael Goi made his name in television, working for shows like Glee, American Horror Story, and My Name is Earl.

Cinematographer Michael Goi ’80 is a four-time Emmy nominee (for Glee, American Horror Story, and My Name is Earl) and winner of multiple prestigious film and TV awards. Growing up on the north side of Chicago, Goi began making his own animated movies featuring dinosaurs made of clay at age 8 after his parents gave him a used 8-mm camera. At age 14, he bought a used 16-mm Bolex. While Goi’s friends headed to military academies after high school, he pursued film school at Columbia College Chicago.

What did you think of Columbia?

What was nice is that they threw the equipment into your hands right away. I remember on the first day, they gave you a Bolex and 100 feet of film and said, “Go out and shoot something that means something to you,” knowing that you would probably mess it up. But it forced you to immediately think visually and how to tell a story visually without relying on dialogue. I thought that was really important and a good approach. Just jumping into it to erase the fear of failure—that was an important thing, because if you’re not afraid to take chances, then you will advance. As a result, I learned to embrace taking huge chances in order to accomplish whatever it was I wanted to do.

After working on documentaries, commercials, and feature films throughout the 1980s and 1990s, Goi went on to shoot the popular NBC series My Name is Earl, for which his cinematography was nominated for an Emmy Award in 2008. In 2009, he was elected president of the prestigious American Society of Cinematographers (ASC), serving three one-year terms, the maximum allowed. When Goi initially interviewed for FX’s American Horror Story in 2011, he didn’t get the job, but executive producer Ryan Murphy instead hired him as an alternating cinematographer for Fox’s Glee. Then, when American Horror Story’s cinematographer left, Murphy handpicked Goi to step in.

What do you consider to be your big break?

Glee, and then ultimately American Horror Story, solidified my reputation as being a creative cinematographer, not just a fast cinematographer. When you work on those productions, especially American Horror Story, it’s one of those shows where you can’t help but notice the cinematography because it’s so obvious—it’s so bold and the material demands that it be that way. It wasn’t until I started working with Ryan Murphy that I was able to push the envelope, and then Ryan told me that what he likes about working with me is that I take his vision and then I take it very far.

What do you worry about?

The work comes and the work goes. Your popularity rises, your popularity falls. Students sometimes ask me, “What made you choose this particular project? What were the artistic challenges that made you want to choose that one over another one?” To be perfectly honest, the artistic challenges come after you’ve decided to choose the project. I do not have the luxury of not working. This is my job. This is what I do to pay my mortgage. This is what I do to support my family. It’s my job just like everybody else has a job.