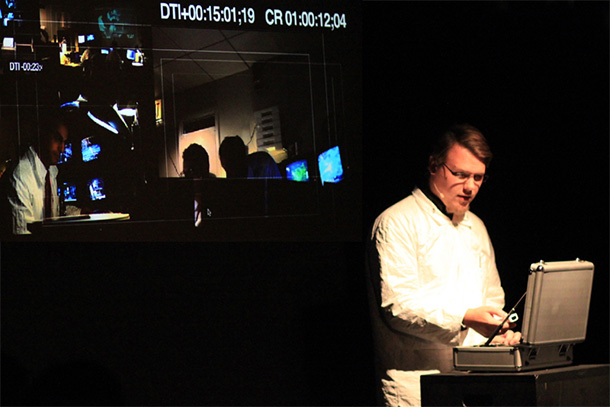 “I deal with things that are based in science but interpret them aesthetically. ”

Nicholas Sagan puts a 21st century spin on his classical training in painting and music.

Among the millennials thriving in technologically explosive times, Nicholas Sagan puts a 21st century spin on his classical training in painting and music. A recent yearlong residency with Chicago Artists Coalition Hatch Project, as well as a number of exhibitions around the city (including Columbia College Chicago’s Fountains Foundation 916), is helping him leave a mark.

The son of teaching artists, Sagan grew up in an expressive household in southwestern Wisconsin. As an abstract painter, he was inspired by Rembrandt, Alberto Giacometti and Richard Diebenkorn. “I was interested in space and structures, as well as how to mold and shape light,” he says. “I wanted to create some sense of scale in space.”

Science fiction has also long held his imagination and may be reflected in some of his installation and new media work that focuses on the drone culture. “I deal with things that are based in science but interpret them aesthetically,” Sagan says. “So in a way, they become science fiction.”

All about That Bass

Sagan started getting serious about music in grammar school. The standup bass has been his identity instrument. But he’s also played electric bass, saxophone and tuba, and says he has decent enough rhythm to work his way around a drum set.

“Over the past six or seven years I’ve really been expanding this idea for myself about what music is,” says Sagan. “I’ve been looking at what music is and means. It’s really exploring sound in experimental ways.”

From Chaplin to Vine

As an instructor at the School of the Art Institute of Chicago, Sagan has redefined his role as an interdisciplinary artist. Teaching a course on the history of cinema, he has been able to connect some of the technological dots. “Being able to articulate a genealogy of all this work leads up to new media and the interdisciplinary practice,” he says. “If a student wants to make a better video project using Vine, they should understand the first pieces of cinema history.”