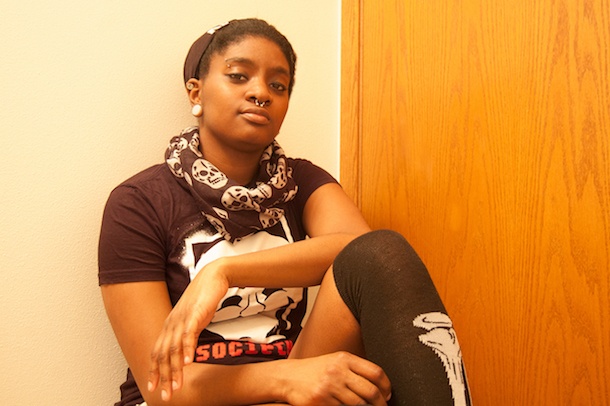 “You can’t just rely on the curriculum to get you where you want to go. You have to go the extra mile.”

Nimah Kelly pays attention to meticulous details: the faint lines on the palm of a hand, a wisp of hair, the placement and curve of an eyelid. As a character artist, she takes concepts and executes them into 2D and 3D figures for video games. At Columbia College Chicago, she honed her digital character-sculpting skills through constant drawing practice in and out of class. Kelly was the lead artist and art director for the collaborative senior capstone project, Metacosmic Earth Race, a first-person racing platform game. Kelly now works for Call of Duty producer Raven Software, where she tests the quality of finished games.

Why she loves digital sculpting: I really enjoy just being able to do things. It’s pretty much like clay modeling, but in digital form. It’s quicker and it’s still messy, which is great. [I love] being able to create and do things on the fly as opposed to [traditional sculpting], which takes a lot longer. If I were to mess up, there’s no CTRL+Z with real clay or metal.

Working as the art director and lead artist on Metacosmic Earth Race: I was in charge of the aesthetic: making sure everything looked like it was part of the game, making sure all the art came out as intended, that it was done correctly, that it was put in the game. I coordinated with design and sound to make sure everything was going well with the art assets and nothing is too big, nothing is too small, nothing is all messed up.

The Columbia professors who influenced her most: When [the senior class] went to the Game Developers Conference, [IAM lecturer] Bill Guschwan sat us down for a talk. The advice that stuck with me was his “Stay Open” rule: Everyone worth meeting is out networking late. You can’t network if you’re sleeping. I apply Bill’s rule when applying for jobs, deciding what I want to do next, and forcing myself outside of my comfort zone.

On her work ethic: [I would go] into the lab and see [fellow student] Quintin Puebla ’15, an amazing artist, just sitting in the back and drawing. I’d see him getting better and better and I realized that what he was doing wasn’t classwork. And I realized that you can’t rely on just the curriculum to get you to where you want to. You have to go the extra mile. That was a big moment for me. I started doing the same thing. When I’m at work and there’s downtime, I start drawing.