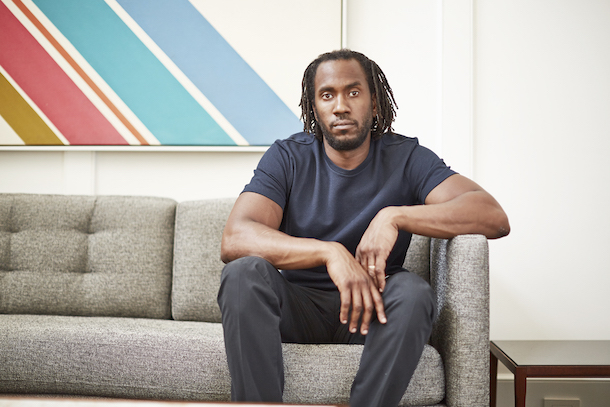 “It gives us a different type of opportunity to have a more complex conversation around race and identity.”

Rashid Johnson ’00 is an internationally acclaimed fine artist focusing on black identity through a wide variety of media and unexpected materials. His 2015 exhibit Anxious Men opened at The Drawing Center in New York City to critical acclaim. The highlight of the exhibit is a series of abstract portraits drawn in black soap and wax on white tile. Their agitated faces are violently scribbled into the materials, emphasizing the fear that comes with being a black man in America today. “There’s a generation of black artists before me who made work specifically about the black experience. But I think for my generation … there’s less of a need to define the black experience so aggressively to a white audience. I think it gives us a different type of opportunity to have a more complex conversation around race and identity.”

From April to May 2018, the David Kordansky Gallery in Los Angeles housed Johnson’s exhibit The Rainbow Sign. The name originates from the nineteenth-century African-American spiritual “Mary Don’t You Weep,” which contains the line “God gave Moses the rainbow sign.” The rainbow sign has become something of a motif in African-American culture, with visual artist Noah Purifoy and author James Baldwin incorporating it into their work and the impresario Mary Ann Pollar using it as the name of her famous black cultural center in 1970s Berkeley. Johnson adds to the rainbow sign’s history with the 16 mixed-media compositions that make up his exhibit.

Recently, Johnson made the jump to film when he stepped up to direct Native Son, based on the 1940 novel of the same name by Richard Wright. Filming began in Chicago in spring 2018.