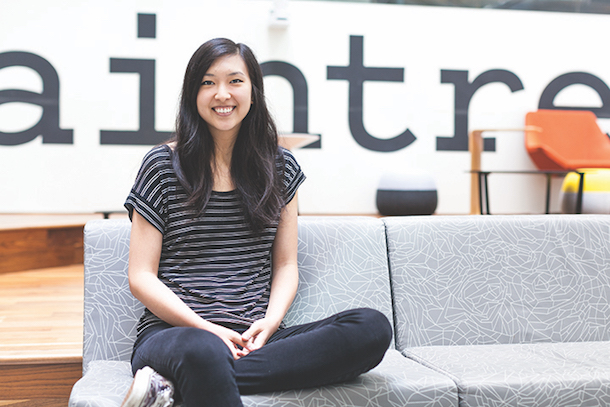 “I knew Columbia had a strong interactive department with courses I was looking for: a mix of design and programming.”

Rebecca Young ’15 is an Interactive Arts and Media graduate who works at Braintree, a company that specializes in digital payment systems. As a product designer and software developer, Young helps with the coding behind Braintree’s products and determines how they should function and appear.

How did you choose Columbia College Chicago?

Right out of high school, I was set on being a fashion designer. I studied at the Fashion Institute of Technology in New York for three years, but two years into the program, I realized that I was really interested in digital design.

I wanted to learn more about how people interact with technology, and how I could be a part of the actual making of a product, such as a piece of software. So while FIT didn’t offer the education I wanted, I knew Columbia had a strong interactive department with courses I was looking for: a mix of design and programming.

What is your job at Braintree?

Now I work as a software developer and a product designer, flexing between both design and programming duties. Since Braintree is an acquisition of Paypal, I get to work on some pretty cool projects for the company. For instance, we recently worked on the Paypal documentations, which is essentially a guide for integrating Paypal products into an app.

What are some of your personal projects?

One of the great things about working in tech is that you can involve yourself with a slew of seemingly unrelated things: music media, product design, robotics--you name it. With a lot of my hobbies, such as knitting, I try and approach them with an interactive touch.

Now I’m drumming up ideas for a project unofficially called “KnitHub.” It’s like GitHub, where you can share ideas and projects, except for knitting, where you share and build off each other’s patterns.