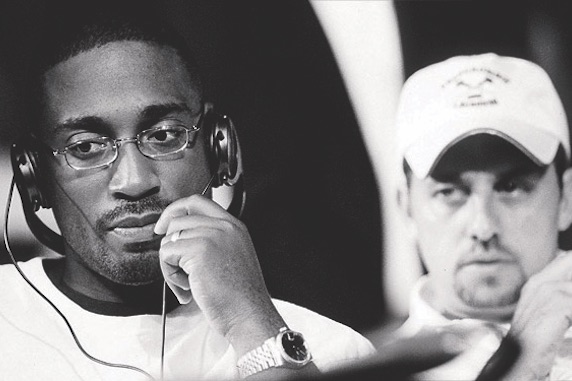 “At the end of the day, you need a good story. That's what Chicago is about and what Columbia College really taught us.”
George Tillman Jr.

From Soul Food to Barbershop to The Hate U Give, the partnership between Robert Teitel and George Tillman Jr. continues to create fascinating films.

Story focused. Hard-working characters. Chicago background. These are often the hallmarks of films made by Robert Teitel ’90 and George Tillman Jr. ’91, such as Soul Food (1997) and Barbershop (2002). But those traits could describe the filmmakers themselves.

Tillman and Teitel met as Columbia College Chicago students when they lived in the same dorm. When Tillman organized a small group of student filmmakers to work on each other’s project, it quickly became evident to Teitel and Tillman that they worked harder than anyone else—and that they were in it for the long haul. Together they formed their own production company, Menagerie Films.

Both men credit professor Paul Hettel with inspiring them to start with a stellar script. "At the end of the day, you need a good story," Tillman says. "That's what Chicago is about and what Columbia College really taught us."

In 2000, Teitel produced and Tillman directed Robert De Niro and Cuba Gooding Jr. in Men of Honor. Tillman was a producer on the Chicago set of Barbershop (which spawned two sequels and a series) and went back to direting with Notorious (2009), a biopic of rapper Notorious B.I.G.

Their most recent work has brought them even more critical acclaim. Both Teitel and Tillman were executive producers on the Academy Award-nominated Mudbound (2017). In 2018, with Teitel again as producer, Tillman directed and produced The Hate U Give, which earned critical acclaim at the Toronto International Film Festival.