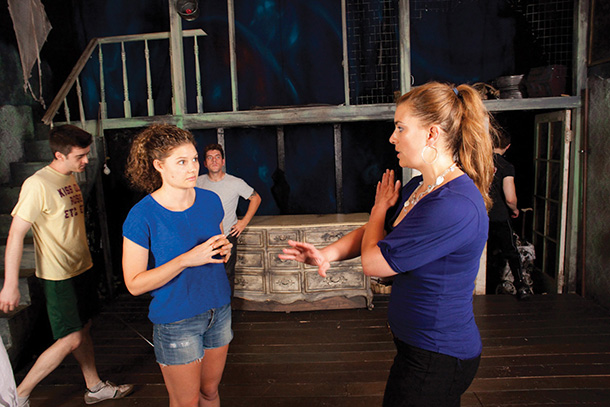 “There’s something amazing about taking an audience on an adventure.”

For centuries, actors have transformed fits of violence into elaborate spectacles on stage.

The choreographed violence is a carefully scripted dance of near misses that both reveals character and thrills live audiences. And it’s alive and well on stage and screen today.

For Sondra Mayer, a Glenview-raised actress who grew up around Chicago theatre, the introduction to stage combat provided another outlet for her acting. “I love entertaining people and telling stories,” says Mayer, who spent her freshman year in film studies before switching back to her first of love of acting. “There’s something amazing about taking an audience on an adventure.”

A physical actor with a background in cheerleading and community theatre, Mayer never held a weapon before attending Columbia. “I could not believe how much I loved it,” she says. “I took to it really quickly and practiced like a maniac.”

Mayer moved to Los Angeles in the early 2000s to pursue her career and has earned critical success as a choreographer in a refreshingly inspired LA theatre scene. She has fight choreographed over twenty-five plays at Sacred Fools Theatre, The Blank Theatre, The Met, Shakespeare By The Sea, LoneStar Ensemble, The Fremont Theatre, Theatre 180, Wicked Lit, and Celebration Theatre.

Mayer was the fight and flight choreographer for Peter Pan: The Boy Who Hated Mothers, whose West Coast run garnered a number of good reviews. The challenge was to have actors flying around the stage without any harnesses, Mayer says, so she incorporated old cheerleader lifts to intensify the action and give the illusion of flight.

The pressures from a directorial standpoint, beyond keeping people safe, put unique demands on a long-running show. “I keep retraining people for Peter Pan,” Mayer says. “The biggest challenge is the wear and tear on people’s bodies. They have to vigilantly train and care for themselves.”

Mayer cites David Woolley, senior Theatre lecturer, as a major influence. “The reason I began teaching was to create ringers that I could then use in the professional world, because there weren’t enough trained fighters with the skills required to do the art that I wanted to do,” Woolley says. “I had to train everyone from the ground up.”

Students with an aptitude for stage combat, like Mayer, were inspired to take their acting careers in new directions, which Woolley says makes them more well-rounded performers. “If you can integrate good performance techniques into your scene while someone is swinging a broadsword at you, you will gain confidence as an actor.”